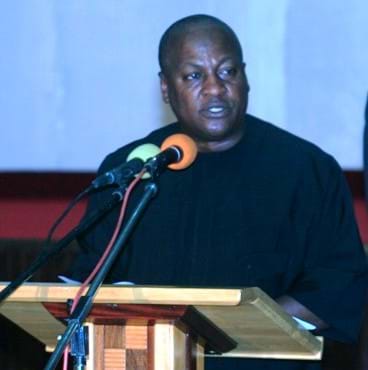 Vice President John Dramani Mahama on Saturday said a culture of insults and insolence was creeping into the Ghanaian society as the 2012 elections draw closer. He said nations have been torn apart as a result of this canker and that care must be taken not to inflame passions and set the clock of progress in the country's democratic dispensation backward. Vice President Mahama stated this in a keynote read on his behalf by Mr.Paul Evans Aidoo, Western Regional Minister, at the a grand durbar to climax the Anluwae Kundum festival of the Chiefs and people of the Lower Dixcove Traditional Area at Dixcove. He urged traditional authorities as custodians of the country's rich culture to come out to condemn remarks that would disturb the peace of the country. Vice-President Mahama raised concern about the numerous chieftaincy disputes which have become a bane of the country's development and the Chieftaincy institution itself. He said chieftaincy and land litigation are a sure recipe for stunted national development and "All too often, some Traditional rulers and kingmakers embroil entire areas in litigation to the detriment of the entire society". Vice-President Mahama said even when lives are not lost, scarce resources have to be wasted by the affected chiefs on legal fees. At other times, the government spend huge sums of money that should have gone into development on security operations for the maintenance and enforcement of peace, he said. Vice-President Mahama said the confusion and warlike situations that are prevailing in certain parts of the country have chieftaincy as the root cause and these conflicts are brought about by selfish individuals who want to ascend to stools or skins by whatever means possible. He said under these circumstances, the government would definitely take appropriate steps to ensure the safety of life and property in any area associated with violent conflicts. Vice-President Mahama called on the Traditional authorities in the area to ensure that there is common understanding and unity among the people of the traditional area in order to bring about the needed development. He said at this crucial stage of the country's history, all human and material resources must be mobilized in the fight against underdevelopment the precursor of poverty, illiteracy, disease and squalor. Vice-President Mahama said there is the need for a concerted effort to improve on the situation of the people and these call for pragmatic efforts towards the education of the girl-child. He called on the Lower Dixcove Traditional Council to collaborate with the Ahanta West District Assembly to initiate an Educational Endowment Fund for the benefit of the education of the needy in the society. Vice-President Mahama said about 89 schools in the Western Region have been awarded on contract and most of these projects are near completion or have been completed and are in use. Nana Kwesi Agyeman IX, Omanhene of Lower Dixcove, appealed to the Government to complete the construction of a sea defence wall in the area saying the project has come to a standstill because of lack of funds. He also urged the Government to improve the condition of the Sankor-Cape Three Point and the Discovery-Medinya-Akwidaa roads and provide the Dixcove hospital with a blood bank. Among the dignitaries who graced the function were Mr. Armah Kofi Buah, Deputy Minister for Energy, Mr. Acquinas Quansah, Deputy Minister for Local Government and Rural Development, Mr. Samuel Jonfiah, Member of Parliament for Ahanta West, Mr. Joseph Dofoyena, Ahanta West District Chief Executive and Captain Anthony Cudjoe (rtd), Sekondi-Takoradi Metropolitan Chief Executive. Tullow Ghana donated 20 computers to the Lower Dixcove Traditional Council to promote ICT education in the area while the Ghana National Petroleum Company also donate 5,000 Cedis to the traditional council and 2,000 Ghana Cedis and drinks towards the festival.