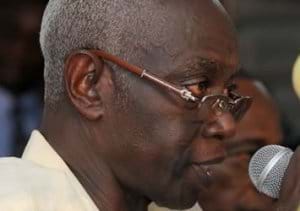 Ghanaians have lost confidence in Dr. Kwadwo Afari-Gyan and the Electoral Commission (EC) prior to the 2012 elections. They think the commission is being manipulated to do things the wrong way. This was revealed in a study conducted by the Centre for African Elections Media Monitoring Index (CAEMMI). The research indicates that only 18% of Ghanaians trust the EC, while 50% have mistrust in the commission in discharging its duties, with 32% standing in between. The findings also revealed that 65% of 2012 election issues in the media were negative. The EC’s image projection in the media, according to the findings, is 61% negative. The level of mistrust of the Biometric Voters Register (BVR) was also 68%. The research was conducted from September to November 2011. In an interview with Daily Guide at the launch of the Centre for African Elections Media Monitoring Index, Dr Messan Mawugbe, Executive Director of CAEMMI, said a greater percentage of those who did not trust the EC were politicians. He said what had accounted for the mistrust was the lack of free flow of information between the EC and the politicians. Dr. Mawugbe therefore urged the EC to strengthen the information link between its activities and the politicians. He said the finding should not serve as an alarm but should serve as an awakening call to the EC. CAEMMI is a non-profit and independent international organization committed to promoting democracy and governance processes in Africa by engaging Elections Media Monitoring Intelligence Tools (EMMIT) in media research. The executive director believes continuous scientific media monitoring of democratic related content is one of the keys in ensuring and sustaining democratic governance and growth in Africa. Reacting to the findings, acting Director of Public Affairs, Christian Owusu Parry, said the negative perception that the public had about the commission was borne out of mere speculations. “We should all be concerned and worried about it”, he said. He said the findings could undermine the credibility of the EC and could affect its activities prior to the 2012 elections. Mr. Owusu Parry noted that politicians had different opinions about the commission, depending on where they stood. He stated that when politicians were in opposition, they became suspicious of what the commission was doing, and when they were in government, they had a lot of confidence in the media. He added that this did not help the commission. In addressing the problem, Mr. Owusu Parry said, “The best way to handle this issue is for us to continue to have constant interactions with all our political stakeholders so that we can explain the issues as we go along." He said, “When politicians have a better understanding of issues, these misconceptions would be taken care off.”