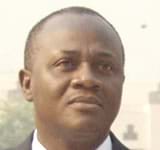 
The Member of Parliament for Okere, Dan Kweku Botwe, says the Minority in Parliament will not be intimidated by Minister for Water Resources, Works and Housing, Alban Bagbin’s populist press conference to back the STX deal. He said the Minority would make their own informed decision on the contract based on the content of the report that would be presented to the house for debate. Alban Bagbin, during a press conference on Tuesday accused the Minority in Parliament of double talk and opposing the deal with the Korean construction firm that will see some 30,000 housing units built for the security services. He alleged that the minority MPs were jealous because if the deal goes through, it will put the ruling NDC in a very positive light and boost its chances of winning a stream of elections at the expense of the opposition NPP. However, speaking on Metro TV’s Good Morning Ghana programme Wednesday, Mr Dan Botwe stated that “nobody can tell me that if the NDC government is able to put up 200,000 houses in 4-years or 2-years, automatically” they are going to be retained in government, recalling that the NDC(I) administration put up the Sakumono and Adentan Estates in year 2000 but still lost the elections. The Okere MP noted that no Minority MP is jealous as Mr Bagbin posited, questioning whether governments undertake projects only because they are seeking the people’s votes to retain power. He asked, “is that all governance is about?” He emphasized that the issue at stake is not about whose government is in power but that the Minority would always do what is right to ensure that the government of the day works for the benefit of the people.