Akufo-Addo | NDC Has Made Ghana A Poverty-Owing Democracy 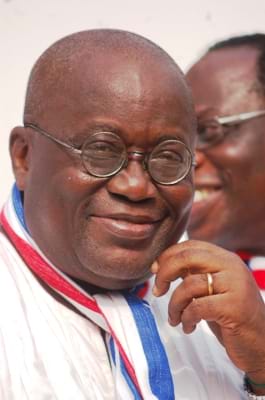 
The flagbearer of the opposition News Patriotic Party Nana Akufo-Addo has ones again chastised the ruling government for pushing more Ghanaians under the poverty line since taking over the affairs of the country. Below is a press release from the communications team of the party about the flag bearers comments. Akufo-Addo: NDC has made Ghana a poverty – owing democracy “Today in Ghana, we are living in a poverty-owning democracy, even as more and more Ghanaians fall below the poverty line of $1.35 a day. This situation is not acceptable. The very people trumpeting alleged care for you are the very people worsening the plight of the ordinary Ghanaian each succeeding day. Where is the better Ghana that they promised?” The above observation was made by the 2012 Presidential Candidate of the New Patriotic Party, Nana Addo Dankwa Akufo-Addo, when he made a major policy statement of his campaign at the 3rd International Conference of the NPP in Hamburg, Germany, on Saturday, June 11. In his hour-long speech, in which he laid out his vision for Ghana, Nana Addo also gave a detailed account of the despondency that has gripped the nation under the government of President JEA Mills. “A vote for change,” he said, “should not mean a vote for less money in people’s pockets.” But, “The 2008 vote for change has rather reduced the people of Ghana to an ever-worsening situation of joblessness and hopelessness, with more and more people begging on the streets for small change.” Nana Addo described Ghana under President Mills as “reeling under the needless weight of a leadership crisis.” Citing examples from all three arms of government, he stated, “For the first time in the history of our 54-year old motherland, the Speaker of Parliament was compelled by the behaviour of her own side, the Majority, to walk out of a sitting of Parliament.” On the Executive, he said corruption, infighting, broken promises and incompetence have become the order of the day. “Instead of steering the affairs of the nation on the highway of stability and progress,” the Presidency, the NPP leader said, “is dodging booms about corruption and ‘nyafu nyafu’ chopping by ‘greedy bastards’ and Team B players from the founder of their party, and preoccupied with bitter feuds between FONKAR and GAME, OLONKAR and SADAM.” While, ordinarily, the NPP would be happy to remain indifferent to this NDC internal issue, “we cannot, however, sit by unconcerned when the all-important affairs of tackling poverty, creating jobs, providing security, fixing our worsening physical infrastructure, investing in the welfare of the young, old and sick are all being set aside in a never-ending struggle to determine who really is in charge. Surely, our beloved country deserves better,” he said. Not only in the Legislature and the Executive can we sense a crisis, Nana Addo stressed, “{The Judiciary, the defender of our liberties, is under threat as well, facing a constant barrage of intimidation and harassment from agents of Government and the ruling party.” He described this threat against the Judiciary, as “a most unwelcome development for Ghanaians, especially when regard is had to the history of judicial assassinations associated with the antecedents of the ruling party.” Why should such a serious threat to our democracy occur after the longest period of our nation’s democracy and at a time when all three official arms of Government are headed by men and women of law, he asked rhetorically. “It does not speak well of the ability of the Chief Executive of the State to provide good governance for our nation,” Nana Addo said. The NPP flagbearer said the increasing impoverishment of the Ghanaian under a so-called party of social democrats was unacceptable. He accused the NDC of cutting the budgets of all the social intervention programmes implemented by the NPP. He referred to findings of a recent survey undertaken by world renowned pollsters, Gallup, in 18 African countries, which showed that under President Mills, 12.7 million people, representing 53% of the entire population, cannot afford the cost of food. In the survey, “Those who admit to living comfortably have dropped from 20% in 2007 to 4% of the population in 2010. In 2007, 11% of Ghanaians said they were suffering under severe economic hardships. Two years into the so-called ‘Better Ghana’ agenda of President Mills, the number of Ghanaians who cannot cope at all with the harsh economic realities has shot up by a whopping 210%, from 11% of the population to 34%.” The NPP flagbearer emphasized, “To put it bluntly, over 8.2 million Ghanaians are saying that ‘enkoyie kroaaaa!’. They have been delivered a bitter Ghana, instead of a better Ghana.” On top of that, Nana Addo added, “the Livelihood Empowerment Against Poverty programme (LEAP), the social welfare benefit system introduced by the NPP to provide some regular financial support for the very poor in our society, is dying under the Mills government of alleged social democrats. Rather than the current driver of Ghana’s development vehicle, President Mills, driving ahead and taking the highway to greater freedom and prosperity, the President has, as Nana Addo himself predicted in 2008, pulled the brakes, turned back, reset the mileage and put back the ‘L’ sign for ‘Learner Driver’. “Today, those in charge of the administration of the state have virtually put the brakes on our development vehicle. "We need to take control of the vehicle again, and as quickly as possible. Indeed, even within the circles of the ruling party itself, there appear to be serious divisions of opinion as to the capacity of the current driver of the Yutong bus to take us safely to our destination,” the NPP flagbearer said to wide applause. He urged delegates of the conference, “We, the NPP, therefore, have a great responsibility to restore the hope, trust and confidence of the Ghanaian people in their government. "We will have to introduce urgent policies that will put our young people to work.” The NPP conference took place from 9th-12 June in Hamburg.