Post -Election Ghana and the quest for a just society 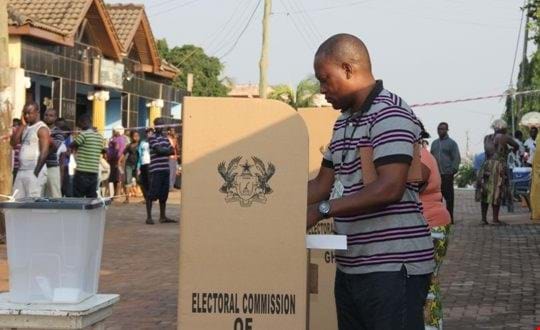 At my polling station in Kaneshie, nothing untoward happened. Voters patiently stood in line waiting for their turn to register their constitutionally mandated right to choose their local legislative representative and a leader for Ghana for the next 4 years. Having just witnessed the strangest of elections in the United States I was prepared for anything but it was all good.

Early the next morning, the major opposition party's national youth organizer announced that they had already won about 170 of the 275 seats. There was no reason to doubt this as parliamentary results are certified locally at the constituencies. Winners and losers know their fate locally before these results are transmitted to the Electoral Commission (EC) HQ in Accra.

This action by the New Patriotic Party (NPP) was the strongest indication yet that they did not trust the EC with its core responsibility. The incumbent National Democratic Congress (NDC) soon responded with a press conference of their own, stating that according to their collated results, the incumbent president was in a "comfortable lead" with about 160 constituencies counted. If they could not provide a list of 160 NDC parliamentary winners, this was likely a false and dangerous claim as it is rare to have "skirt and blouse" voting involving the two major parties. They also launched a tirade against independent election observers, which was not only pitiful but dangerous.

As the day wore on, most of the country expected the president to concede early to ease rising tensions, because it was clear to anyone with minimal math skills that, the NPP's lead was now insurmountable. The EC reminded the nation that they had 72 hours within which the EC chair as the Returning Officer for the presidential race, would announce the final results. This did not help matters as the people had already decided that Nana Akuffo-Addo was the new president of the 4th Republic of Ghana.

When the concession came later on the evening of 9-9-2016, it was grudging at best. It included a remark about "irregularities" which most found in bad taste. Why the NDC was in a state of disbelief, surprised few objective political observers. They had already failed the first math test. In the last 4 years, Mr. Mahama, though reasonably popular, had proven to be weak in dealing with miscreants on his team. Many Ghanaians believed after many financial revelations and scandals, that the governing party had lost its moral compass under his leadership. The party was out of touch with the electorate. It was routine for NDC officials, when confronted disturbing data, to simply respond with a partisan "ignore them." They were regularly insulting the intelligence of Ghanaians. They harboured no expectation of accountability to the voting public. Non-partisan expert advice on many important issues was routinely ignored. Mr. Mahama continued to turn a blind eye to the log in his eye.

Mr. Rawlings, founder of the NDC, later attributed the electoral loss to "corruption, impunity and disrespect." Interestingly, he has said nothing about punishment. This, from the man responsible for the deaths by firing squad of corrupt generals, some of whom were killed merely for taking loans.

Ghanaians became quiet and firm in their resolve to use the ballot box to effect the necessary change. What Ghanaians have voted for is transparency and accountability to taxpayers. The country is politically and geographically polarized but morally united in seeking a proper accounting from those they elect to serve.

The president-elect's early statement that no one joining his government should harbor the expectation of making money is of comfort to Ghanaians and represents the kind of clarity the public expects from a leader on corruption.

His other responsibility is to foster an environment in which the all state institutions including those directly responsible for fiscal accountability function with greater efficiency. Ghanaians also want a review of how the borrowed USD 25bn over the last 4 years has been spent. Anyone who has committed a crime in this regard, should face the full rigors of the law or the cycle of theft will never end and Ghanaians will continue to suffer from poor leadership. This is not a proposal for a witch- hunt but the firm application of due process. The legal standard must be Ghana's standard.

It is ironic that one of Mr. Mahama's midnight appointments was that of a substantive Auditor-General. I do not believe that he acted on the last 4 annual reports from this agency, which revealed daylight robbery by officials from the local government level to the national levels of government.

Proper accounting and action against offenders is what Ghanaians have voted for. And oh yes, competent and honest appointees to serve us in our quest for sustainable national development. There is a great deal of attitudinal change that the new government must foster through actions rather than words. Nana Akuffo-Addo's government must not preach, it should act. The fundamental problems continue to be illiteracy, indiscipline, poverty and disease. Without strong public sector reform driving a sustained change in our management culture, precious little will be achieved. This is an area in which Mr. Mahama failed the nation woefully.

Without dispassionate application of the law in all areas of Ghanaian life, it matters little who is at the helm because our progress will be stunted. Our development must be rooted in a truly just society. Justice for the rich and justice for the poor. I tire of reading about people jailed for stealing goats while white collar criminals roam free flaunting their stolen riches in churches.

Ghanaians have Dickensian great expectations of President-elect Akuffo-Addo and his team.

They must be qualified, competent, truly disruptive and incorruptible. Above all, the greatest challenge is reforming the public sector by improving efficiency and productivity so that it can act as a real catalyst for private sector and job growth. Dealing with any public institution in Ghana right now is a dreadful waste of time. This is not good for business. The use of technology must be rapidly leveraged in the public sector.

The inherent creativity and innovative essence of Ghanaians await their day of freedom and not a moment too late, for we are in a very competitive global marketplace.

Dedicated to my granddaughter Eliska Ewurekua Setrakian. - "Welcome to our world."

Mirror in the Dark, The Story of Bagbin 109

Galamsey: A symbol of National Ineptitude 145

When shall we overcome? 164

Ghana's Elections: Down to the wire 120