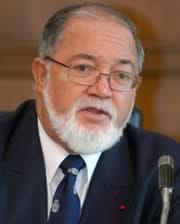 MANCHAM Sir James Richard Marie (B. Sey. 11.08.39) – KBE – PhD (Honorary). Founding President of the Republic of Seychelles. President of the Global Peace Council of the Universal Peace Federation. Education: Seychelles College; Wilson College (London); Council of Legal Education (London 1958 to 1961); Called to the Bar (Middle Temple, London 1961); Auditeur Libre a la Faculté de Droits es Sciences – Economiques, University of Paris (1962); International Institute of Labour Studies, Geneva (1968). Career: Barrister and Attorney-at-Law, before Supreme Court of Seychelles (1963 to 1967); Founded Seychelles Democratic Party 1964; Member of Seychelles Governing Council (1967); Leader of Majority Party (1967); Member of Seychelles Legislative Assembly from 1964 to 1970 (Three times elected); Member of the Executive Council 1964 up to Self-Government; Led Seychelles Democratic Party to the Seychelles Constitutional Conferences in London (1970 and1976). Pioneered International Tourism to Seychelles – was first person to disembark from a wide bodied plane in Seychelles (BOAC VC10 – 4th July 1971). First Chief Minister (1966); First Prime Minister (1976); Founding President of the Republic on 29th June 1976; A victim of Coup d’Etat of 5th June 1977, when in London to attend Commonwealth Heads of State Conference and to celebrate the Jubilee of Queen Elizabeth II; Lived in exile with London base from June 1977 to April 1992, when he returned to Seychelles to contribute to the country’s return to multi-Party Democracy. Recently Sir James has been listed as a mediator and arbitrator with the World Intellectual Property Organisation (WIPO) in Geneva, Switzerland. During his term as Chief Minister, Prime Minister and later President – Sir James attended several Conferences under the aegis of – American Society of Travel Agents (ASTA) – The Commonwealth Parliamentary Association (CPA) – The United Nations (UN) – Association International des Parle-mentaires de Langue Française (AIPLF) and was the keynote speaker at UNESCO Summit in Nairobi, Kenya in 1977. Years in Exile (1977–1992): During his years in exile in London was active as an International Trade Consultant; Joint-Venture Specialist and Entrepreneur; President of Berlin European Airways (1987 to 1990); President of International Promotion Marketing and Development Ltd. (IPMD Ltd.); Director Pembroke Capital Aircraft (Shannon) Ltd.; Consultant Mercandia Shipping BV LTd.; Consultant to Midland and Scottish Resources (Oil Exploration) Ltd.; Consultant to Germania Flugg GMBH of Germany. In fact, since 1965 he has been a Fellow of the Royal Society for the Promotion of Art Manufacture and Commerce of the United Kingdom. Also whilst in exile, he founded The Crusade for Restoration of Democracy in Seychelles and was Lecturer on “The Struggle for Power in the Indian Ocean,” to U.S. and European Universities, Civil Organisations and on the Cruise Ship “Lindblad Explorer.” He also spoke in 1992 at the Heritage Foundation and Washington Press Club in Washington, D.C., USA and at the Cambridge Union Society in the UK. Return to Seychelles from 15+ years of exile in UK: On his return to Seychelles on the 12th of April 1992, he proclaimed himself “Apostle of National Reconciliation” and has acted since as a statesman in the internal political process – seeking to promote National Reconciliation and promoting the concept of Seychelles First through the mouthpiece of his monthly magazine the Seychelles Review/Le Revue de Seychelles.