Star Wars To Be Remade in 3D 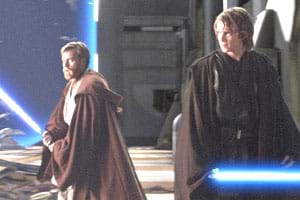 George Lucas has confirmed plans to release 3D versions of the 'Star Wars' saga. The conversions will begin in 2012 with the 3D release of 'The Phantom Menace'. If successful, the remaining five films will be released in consecutive years. According to media reports, the year gap between films is to ensure that they look as state-of-the-art as possible. A 3D conversion of the films has been heavily rumoured, but it's believed the surge of interest in 3D TV technology has pushed Lucas' timetable forward. Each film will be released theatrically first. It's yet another expense for 'Star Wars' fans, with multiple versions of the hugely popular series having been released on video and DVD. Lucas is planning the Blu-ray release of the six films next year, complete with never-before-seen deleted footage and new making-of documentaries. There was fresh controversy recently after Lucas unveiled a deleted scene of a cloaked Luke Skywalker tinkering with his lightsaber from 'Return of the Jedi'. Mark Hamill threw a spanner in the works though, insisting he never shot that scene - leading some to speculate that the scene was shot recently in a bid to inject excitement about the Blu-ray releases. However, given that it's a close-up shot it's not unusual for filmmakers to use stand-ins for the main stars during 'inserts'.