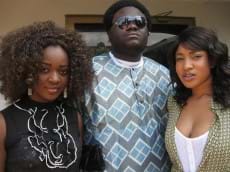 ‘Honey Choochi Choochi’ is a popular term in a Tigo Advert. In the said commercial, a guy who couldn’t hear what his lover was saying on the other side of the phone because of poor network service climbed on the tallest coconut tree.

The guy in the said advert, Ruffy Samuel Quansah has produced a movie titled ‘Honey Choochi Choochi Love’. It is a story of two loved sisters who found themselves entangled in a common love web each fighting desperately to keep the man of their hearts. Jacob (Ruffy Samuel) stumbles in love with Chelsea (Jackie Appiah), a relationship Chelsea’s father (Kofi Adjorlolo) disapproves vehemently. As much as her father tries to get rid of Jacob from the grip of Chelsea, there return of Nadia (Tinto Dikeh), beloved sister of Chelsea from her sojourn abroad adds to the woes of the father and family.Nadia also realizes Jacob is the man she has forever seen in her dreams as her soul mate. Not prepared to let go off the man she nearly abandoned her family to keep, Chelsea finds herself in a conflict with herself and her only sister over Jacob. The conflict threatens to break up the family. And to save the situation, a decision has to be made to get ride of one of the three.

The movie is under the stables of Young Father Productions. It was written and directed by the Nigerian director John Izedonmi, Ruffy Samuel Quansah and features Jackie Appiah, Kofi Adjorlolo, Nigerian actress Tonto Dikeh and Karlsoum Sinare Baffour. Ruffy Samuel Quansah, the producer of the movie, also the CEO of Young Father Productions began his acting journey nine years ago. He has starred in series of productions such as ‘Hotel Saga’, ‘Games People Play’, ‘Small World’, ‘Broadway’, ‘Golden Stool’, ‘Dead End’, ‘Cold Tears’, ‘Face of the Unfaithful’ which earned him nomination in the 2008 edition of the African Movie Academy Awards in the most promising category. His short stint in the series ‘Dada Boat’ also brought up the ever popular phrase ‘My Shizzle My Nizzle’. He also played a key role in the Hollywood production ‘Punctured Hope’ and has worked alongside Jim Iyke, Majid Michel, Desmond Elliot, Kanayo O Kanayo.

The movie will be premiered at the Silverbird Cinemas from 26 th March, 2010 at 6:00pm each night.