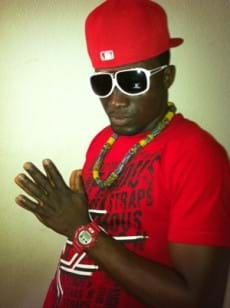 Not only is the song “Yen Ko nkuaa” creating waves on the music scene since it was released last March, but it is also wedging a huge rift between two hip life artistes: Eduwuji and Stay J. Both artistes are laying claim to the song. While Eduwuji, real name Raymond Eduwuji Gbedze, is accusing Stay J of breaching the contract between them not to sing the song at shows without him since he (Eduwuji) had made a one off payment of GH¢1,500 to Stay J to just feature on it, Stay J of “Shashewoowo” fame claims he has every right to perform “Yen ko nkuaa” without Eduwuji because he is the original composer of the song. In an interview with Graphic Showbiz last Tuesday, Eduwuji said he wrote the entire song by himself and that Stay J only sang the Twi part. “In fact it was a demo I wanted to master at sound engineer, Kaywa's studio and because we were both then on the same record label, Under One Entertainment, the management suggested that Stay J who was already out with “Shashewoowo”, should do the chorus which he did, but Stay J is not the owner of the song,” Eduwuji said. “In fact the chorus which Stay J sings: “So me ha na so me ha……” was initially written in English as “Hold my here, hold that” and he only translated it into Twi. If the song belongs to him, why did I have to pay him GH¢1,500 to feature on it?” he asked. Eduwoji said Stay J had performed the song on several platforms knowing he didn't have the right to do so. “He goes about saying the song is his. I have respected him all this time but it seems he has no regard for contracts. If this situation continues, I'm afraid I have no option than to get my lawyers to write to him”, Eduwuji stated. Stay J William Kojo Johnson, aka Stay J, however, said after releasing “Shashewowo”, he decided to help Eduwuji out by featuring him on Yen Ko nkuaa. “It's rather unfortunate Eduwuji is saying he owns the song. I only asked him to sing on “Yen Ko nkuaa” just because we were on the same record label. I felt because he sang only in Ewe, it would be difficult for him as an up-coming artiste, so I decided to feature him on “Yen Ko nkuaa” to get him the exposure. Is this my reward for helping him out?” asked Stay J. Stay J said if Eduwuji wants to ride on his back to be famous he has no problem with that but he cannot accept the lies he (Eduwuji) is peddling around about the song. “Yen ko nkuaa” was supposed to be released on an Under One Entertainment compilation but out of greed, Eduwuji claimed ownership of the song. I rest my case in the hands of God, but I know the truth about who actually owns the song will come out one day,” said Stay J. Stay J also denied the allegation that he was paid GH¢1,500 by Eduwuji's management not to perform the song on any platform. “The money was rather paid to me for allowing him to sing the Ewe part of my song. My manager asked Eduwuji to take care of the recording of the beat and video clip which cost GH¢ 1000 if they wanted to be part of the song. I also demanded for additional GH¢500 for the clothes I had bought for the video clip. That's how come they gave me GH¢ 1,500”, he added.