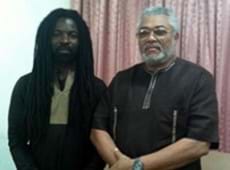 International Reggae Star Rocky Dawuni was recently in his home country of Ghana to hold a series of meetings to discuss a broad range of issues with Ghana’s top leaders. Dawuni met with the Vice President of Ghana, His Excellency John Dramani Mahama, and former Presidents of Ghana; His Excellency Jerry John Rawlings and His Excellency John Agyekum Kuffuor. The celebrated Ghanaian musician, who was recently the focus of CNN’s African Voices celebrated program, was in Ghana’s capital, Accra during a break in touring. Dawuni met Vice President John Mahama at his office in Christianborg Castle where they touched on the state of music in Ghana. The Vice President commended Dawuni on his continuing positive projection of Ghana on the global stage and expressed his desire to support the growth of Ghana’s music scene. Dawuni’s meeting with the former President Rawlings focused on the importance of engaging African musicians and artists across the continent to on issues facing Africa, especially the famine in the Horn of Africa. President Rawlings, who’s currently the African Union (AU) High Representative for Somalia and the Horn of Africa, expressed his appreciation at the opportunity to collaborate on bringing more attention on the devastating humanitarian crisis in Somalia, Ethiopia and other parts of East Africa. Former President John Kuffour focused more on their mutual interest in protecting the environment while commending the Ghanaian musician for his musical achievements. Dawuni discussed his forth-coming initiative which will focus mainly on a nationwide tree planting campaign in which President Kuffour pledged to support. While in Ghana, Dawuni also met with the new Israeli Ambassador to Ghana, Sharon Bar-Li to discuss cultural relations between the two countries and attended the “Founders Day Celebration” honouring Ghana’s first President, Kwame Nkrumah. The Founders Day event was also attended by former South African President, Thabo Mbeki, Vice President John Mahama, MP and daughter of Kwame Nkrumah, Samia Nkrumah and former President Kufuor. “It’s an exciting time for Ghana as there is a renewed consensus to transcend every division towards a common national destiny.” Dawuni stated. During his stay in the capital, the award winning artist who is also Ghana’s Tourism Ambassador was also appointed “World Music Ambassador for MUSIGA (Musician’s Union of Ghana).”