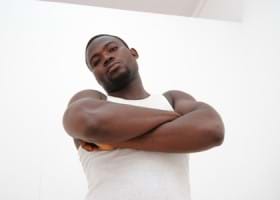 The Ghanaian industry is gradually growing from strength to strength as each day sees the introduction of a new artist. The latest on the scene goes by the name “Odumja”. Known in real life as Dangmaa Felix Lambert, Odumja has been an underground artist for about ten years, due to his education.

In the past, music, compared to other professions, was reserved for school dropouts. However the coin keeps on turning as in recent times students from the various tertiary institutions has joined the music industry likewise people from other professions.

One of such person is Odumja who is a pursuing Journalism. Hitting the music industry with several singles from 2007 till date, Odumja shot his first video clip in 2011, which was promoted the same year. The single, which was a hip pop song titled “Look Sharp” was basically targeted at the youth.

It was a song that inspired the youth to move on despite the challenges in life. He has performed on several platforms alongside artists like Buk Bak, Obour, and Iwan.

As the ‘Azonto’ fever has engulfed the whole nation, Odumja who is currently a student of the Ghana Institute of Journalism, has come out with another single album entitled Blak Panta”.

He is currently touring some Senior High Schools in the northern regions with this new single, alongside other promotions ongoing.