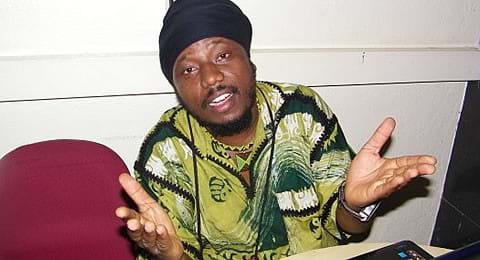 Hard hitting reggae musician Blakk Rasta seems to be on a war path with the West for what he says is the deliberate assassination of an African savior, former Libyan leader Moammar Gadhafi. According to Blakk Rasta, who is also host of Taxi Driver on Hitz 103.7 FM, the West does not want Africa’s self-reliance and success thus killing the man who was fighting for the continent’s redemption. He explained to Myjoyonline.com in an interview that, the West (America and NATO) killed Gaddafi because he “wanted Africa to have one currency known as the Gold Dinar which would have destabilised all the wicked who have been sponging on Africa’s resources.” “Gaddafi did not understand why our African currency should be supported or backed by the dollar so he wanted Gold which is abound in Africa to be used as the backing and because of that they didn't like it, they killed him,” the Barack Obama hit maker lamented. Portraying Gaddafi as a nobleman other than what he was widely perceived to be – a ruthless dictator who ruled for 42 years – Black Rasta defended that he was a man who had Africa at heart. “He was giving his everything to see Africa strong remember he established three banks in Africa. He wanted to kick out the International Monetary Fund (IMF). The West was making a lot of money out of Africa and he didn’t like that so he established these banks and was on the verge of introducing with the support of other countries the Gold Dinar which would have Africa freer. We [Africans] wouldn’t have gone to the IMF to get any money, they [West] didn’t want that,” Blakk Rasta reiterated. Blakk Rasta born Abubakar Ahmed, also posited that Gaddafi, a man he described as a martyr and a pan-Africanist, was killed because he “rejected the Arab League in 2010; I’m told that he didn’t want to be part of them anymore." Blakk Rasta made known that he will be releasing a song, Gaddafi, produced by Kaywa and Zapp Mallet, to voice out his displeasure at the killing of the former Libyan leader which occurred in October 2011. The Gaddafi song which is already on iTunes will be released officially on January 30. It is in four versions which feature Stone Bwoy, Mugeez of R2Bees and Fiifi Selah. The fourth features Jamaican artistes, Busy Signal and Kiprich.