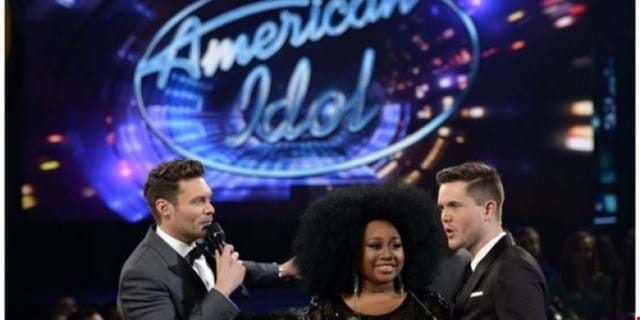 Trent Harmon has been crowned the 15th and final winner of American Idol in a star-studded farewell show.

The 24-year-old waiter beat fellow Mississippi native La’Porsha Renae to the title as the long-running series came to a close.

It was a surprise win for Harmon, as the judges had tipped 22-year-old Renae to triumph.

He fell to the floor after he was announced the winner and tearfully praised his rival.

“I know that I have a God-given ability, but I didn’t want to take it for granted. I wanted to work so, so hard, and [Renae] pushed me to do it,” he said.

Harmon worked as a waiter at his family’s restaurant before auditioning for the show. He grew up on a farm and described himself as a “dude from Mississippi”.

Single mother Renae overcame domestic abuse to compete in the show and won support from the judges for her powerful voice.

Fox announced in May last year the long-running talent show would end after its 15th season.

US President Barack Obama kicked off the show with a taped message congratulating the show on its 15 years.

He said he hoped young people would be as eager to vote at the polls as they were to vote for their favourites on the show, adding he was doing his best to make it as easy.

The show was launched by Simon Fuller and Simon Cowell in 2002, based on their hit UK series Pop Idol. Cowell was an original judge on the show along with Paula Abdul and Randy Jackson.

It paved the way for a wealth of TV talent contests including The X Factor and The Voice.

The show launched the careers of Kelly Clarkson – who was the first ever winner – and stars including Carrie Underwood, Jennifer Hudson, Jordin Sparks and Adam Lambert.

Original judges Abdul and Jackson appeared on the show to pay tribute to host Ryan Seacrest, while Cowell also appeared on stage and said he was “feeling quite emotional” about the end of the show.

The singing competition drew 36 million viewers in its heyday in 2006, but ratings have fallen every year since then.

It averaged about 11 million viewers last season, but with fewer younger viewers which are favoured by advertisers.

Ending the show Seacrest said “Good night, America” adding when the screen faded to black, “for now”. Source:This article was published from starrfmonline