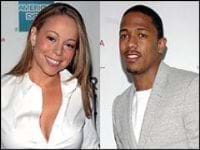 Mariah Carey’s marriage won’t last more than six months, according to friends. The 38-year-old singer, who wed rapper Nick Cannon in April, is so demanding her new husband won’t be able to cope with her diva-like behaviour. One pal close to Mariah revealed 27-year-old Nick has become a source of ridicule for her friends and associates. The source told Life and Style Weekly magazine: “I give the marriage six months, tops. I can’t see it lasting. “Nick does whatever Mariah wants him to - he’s like her puppy. It seems like he spends more time in the stores with Mariah’s credit card than he does with Mariah herself. “Mariah’s assistants and friends call him ‘Whipped Nick’ behind his back. They have little respect for him because he won’t stand up for himself.” However, a friend of Nick’s has vehemently denied the relationship is already in trouble, insisting Nick and Mariah are perfect for each other. The pal said: “Mariah needs someone to dote on her.” Mariah and Nick tied the knot in a secret ceremony in the Caribbean in April, after dating for just one month. Mariah was previously married to record company boss Tommy Mottola for five years.