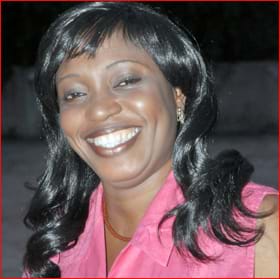 Veteran Ghanaian actress Amanorbea Dodoo says Ghana’s movie industry has a very great future to rock with the best in the world. However, she advised that can come to a total fruition if Ghana’s industry players shunned practices that Nigeria movie makers have already moved away from before they got to where they are now. The mother of one from Akwamu, who has stayed in the United State of America and United Kingdom for most of her life, was once a very hot actress in Ghana in the 90s. Her very first movie titled ‘Suzie’ in 1990, starring David Dontoh among others, was an instant hit and that brought her into the limelight. Since then, she has never looked back. Her dexterity pushed her up and she even went on to win the best actress, at the 1995 Black Filmmakers Hall of Fame in Oakland California, for the foreign category for her role in the movie titled ‘Heart of Gold’. After receiving that award, she did not come back to Ghana. Having stayed there for so many years, she appears to be back for full-time acting. She told NEWS-ONE in exclusive interview on Sunday she is as well running her other businesses including her own Non-Government Organization (NGO) on Mental Health called Ghana’s Organization on Feotal Alcohol Syndrome. She organizes seminars on harmful effects of alcohol on pregnant women and also works with the National Disability Council. She is currently on set of ‘Somewhere In Africa’, a movie being directed by Frank Rajah. According to her, even though Ghana’s movie industry has lost its shine to Nigerian movies, there are signs of regaining it. However, she advised stakeholders on their approach to attaining that feat. “If you are running a race and somebody passes you, you don’t strive to get where the person has already gotten to, you have to strive to pass the person. Instead of us to strive and take back the front row from Nigeria, we are rather striving to get to where they have already left.” Nigerians, she explained, “started those movies which characters disappear into thin air and they left there and have reached where we were supposed to have reached. But right now, instead of us to try and pass them, we are rather imitating what they did and seeing that as the ultimate.” Movie producers, writers, directors, actors and actresses, she said, can help improve the system, adding that “let’s move beyond what Nigerians have done. We should encourage stories that people can relate to; stories that people can have moral benefits from.” “But I want to advise my fellow actresses and actors to be aware of the fact that our children are watching us.” Currently, everything about movies is only about entertainment and is no longer friendly to children. That, she said, is not too good for an industry that seeks to grow. Children, she continued, should be able to watch a movie and not only take away something good from the movie but “say this actress or actor is my role model.” The industry, she emphasized, has a great responsibility to society and movie makers must not waver in doing that. Personally, she rejects what she describes as “morally insane scripts”. Amanorbea left Ghana for London in 1985 and returned in1990. Upon her return, she joined David Dontoh’s Kozy-Kozy drama group. During one of their rehearsals, David invited her and three other ladies in the group to play a role in an upcoming movie. Before they got on set, the director had already chosen someone to play the lead role. But she was later asked to take over from that person after they were asked to do a walk. That explains how come she got her first role in ‘Suzie’, the first movie with ghosts in Ghana. Later, she appeared as lead actress in number of other movies including ‘Sergeant Abrebese’, ‘Meeba’ with Sidiku Buari, ‘Child @ 6:30’, ‘Heart of Gold’ by Kofi Yerenkyie, and ‘Twin Lovers’ which was her last movie before leaving for the US in 1995. She moved back to Ghana in 2007 and did a TV series titled ‘Remnant’. Her first movie after her return was ‘King Is Mine’. That was followed by ‘Material Girls’, ‘Dons Of Sakawa’, ‘Who Owns The City’ and a number of others which are not yet out. Amanorbea started schooling from Lamptey Mills School now the Great Lamptey Mills in 1965 when she was only four years. She continued at Mamprobi Primary School AND then to Happy Home Academy Preparatory School. From there, she went to St. Roses Secondary School and later enrolled at the South East London College in London. She did medical techniques at the Oaklahoma Community College before reading Nursing Assistant at Moore Norman. University of Minnesota was her last stop where she did Effective Communication in Mental Health.