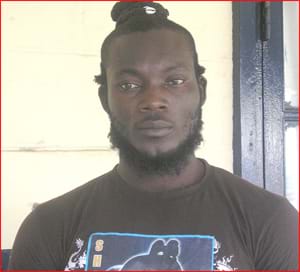 His real name is Richard Cobbina and many Ghanaians fell in love with him after he acted the role of Shaka Zulu in the video clip of 4x4’s hit track ‘Fresh One’ and his popularity further increased since he started appearing in a TV commercial for Tigo. He is popularly called Shaka Zulu, keeps a strange beard and hairstyle and receives a lot of cheers from his fans almost everywhere he goes but NEWS-ONE can report that this TV star has been arrested by the Accra Regional Police Command over an armed robbery operation. Shaka Zulu has confessed to being an armed robber but says he only robbed just once so he could get money to take care of his pregnant wife and organize an impressive ‘kpojiemo’ naming ceremony for his baby. He is currently in police custody with two other accomplices, while a third accomplice is currently on the run. Shaka Zulu, 31, and four others were said to have armed themselves with guns and stormed Lashibi, near Tema, for a robbery operation, during which they attacked a businessman and took from him an amount of GH¢20,000 plus four laptop computers. According to the Regional Police Crime Officer, Superintendent Frank Adufati, a resident of Lashibi reported to the police that on June 23, 2009, five unidentified gunmen attacked him at his residence at about 1:30am and took away his GH¢20,000 and five laptops. He said as the armed robbers fled, the complainant raised an alarm and the youth in the area grabbed one of the five suspects, who gave his name as Paul Owusu when he was handed over to the Sakumono Police. Paul Owusu was arraigned before court but he refused to disclose the identity or whereabouts of the four others and he was eventually tried and sentenced. However, on August 19, 2010, the police had a tip-off that Owusu’s accomplices were in a hideout at Nungua. A team of policemen raided the location and arrested three of them including Shaka Zulu, Abass Baba Richard, and Wise Gray aka Biggy, 26, who is said to be the ring leader. The forth accomplice, known as Gladstone or Stone, is at large and the police are on his heels. The three, according to the police, have admitted and confessed to being those behind the robbery but while Shaka Zulu is insisting he was part of the Lashibi robbery only, his two accomplices, Abass and Wise, are saying that the entire group is responsible for most armed robbery operations around East Legon, Sakumono, Spintex Road, Haatso, Airport and Nungua areas.