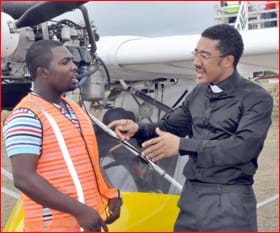 Ghanaian actor Majid Michel is all set to break new barriers and shock a lot of fans as he walks in the award winning but unsafe shoes of top investigative journalist, Anas Aremeyaw Anas. The top actor, who is most often described as a ‘screen bad boy’, is relegating some of the ‘bad boy’ traits to the background to play the role of an investigative journalist in his upcoming movie titled ‘Somewhere In Africa’. This role is to clearly appreciate the good works of some investigative journalists and Anas is one of such persons in Ghana. Majid is playing the role of a struggling undercover journalist, who is trying to get a very big break. However his editor is making this mission a near impossibility. Aside that, all is also not well at home as he does not have time for his family because he is always traveling from one country to another to investigate stories. Majid, a father of two, has played different roles in countless movies but the performance he puts out in ‘Somewhere in Africa’ is unprecedented. He is playing the role of a journalist despite his several unpleasant encounters with members of Ghana’s inky fraternity, especially entertainment writers. NEWS-ONE visited Majid while he was on location shooting the said movie and this was what he had to say: “So far, this is the most difficult thing compared to any other movies that I have done. Sometimes, when we finish shooting, it takes us about two hours to just get the make-ups off. We also have to talk in a certain accent which is unusual.” He actually played two different characters in the movie. He acted as a journalist called Frank and then as the wicked King Mumbasa of a Kingdom in Africa called Kinbala. The director, Frank Raja, said he had been working on the movie for the past one and half years and expressed the hope that it would cause a big stir when it finally comes out. “This is a movie enthusiasts would want to see. I have planned this movie several years back and I had to put myself together and make sure that all the props are ready. I will not say much but I will say it is a fantastic movie and Africa should watch out for us. I know this is not going to be my best as far as film production is concerned but this movie is sure going to be the best I have ever made,” Frank Raja told NEWS-ONE.