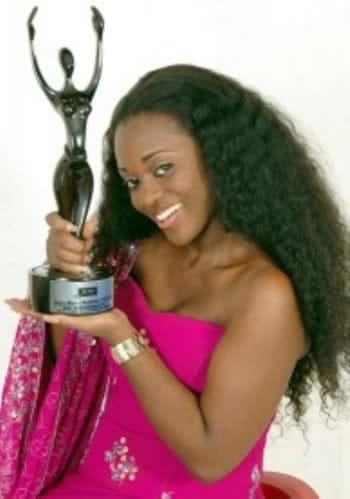 Adorable Ghanaian actress, Jackie Agyeman Appiah, has vindicated herself as the best actress of the moment in Ghana and Africa. Jackie who won a controversial three-in-one award early this year for Best Actress in a Leading Role” with co-winner Lydia Forson and Naa Ashorkor at the 2010 AMAAs, has now single-handedly stamped her authority as the best actress in Ghana. Jackie won the “Best Ghanaian Actress” of the year at the City People Entertainment Awards in Lagos, Nigeria over the weekend Sunday July 18. The glamorous celebrity event took place at the ‘10 Degrees Even Centre’ (Plot A2 Billingsway Road, Opposite Unilever Ltd) Oregon, Ikeja, Nigeria. She was nominated alongside co-star, Ghanaian actress Lydia Forson, Naa Ashorkor Mensah- Doku, Nadia Buari and Yvonne Nelson, and this time Jackie stood tall among all of them, as the ultimate screen goddess in Ghana. In an exclusive interview with Peacefmonline, joyous Jackie on her arrival in Ghana yesterday evening shared her happy moment. “It was a tough category because all the nominees are very good; they are all talented in their own ways. Nadia Buari was there, Lydia Forson, Naa Ashorkor, and Yvonne Nelson were all there and they are good actresses. So for them to have called my name, I was really happy. I think that people are appreciating my work and that means I have to work harder. This is the second time this year that I am winning an award and I will give God all the glory for that”, she said. Jackie said she is dedicating her awards to her fans in Ghana and all over the world. “I dedicate this award to my fans. This is my second award this year. I told them to keep praying and this shows that they are praying for me. Without them I wouldn’t be where I am today. They should continue praying for me. I love them, I thank them and appreciate what they are doing for me”, she told peacefmonline. Great performers from Ghana and Nigeria entertained the crowd. Ghanaian singer Becca, performed on the night, as well as Nigerian musicians and comedians. Other Ghanaian award winners include: Shirley Frimpong-Manso who won “Best Producer/Director of the Year (Ghana), actress Juliet Ibrahim won “Best Ghanaian movie personality”, Becca “Best Female Musician of the year in Ghana”, hiplife group VIP won “Best Artiste of the Year (Ghana)”, and Swagger Boys Ruff n Smooth won “Best Group of the year, Ghana”. Asked what next after winning all these awards, Jackie said “Well I leave everything to the Almighty God to direct me because He knows what is best for me”. She attributed her success to God and hard work. Jackie Appiah came into professional acting when she was featured in her first movie “Devine Love” produced by Venus Films. That was after she made her first TV appearance in a soap opera “Things we do for love”, where she played ‘Enyonam’. She has since starred in countless best-selling movies. Before her AMAA this year, Jackie won AMAA for “Best Supporting Actress” in 2007 and an ACRAG Award for “Best Actress in Ghana in the same year. Her latest movies on the market are “Who Loves Me?”, “4Play” produced by Venus Films and “The Supremo” produced by Peace Films, and the yet to be released movie “Summary”. She is currently on set with Abdul Sallam Mumuni of Venus Films, shooting what she describes as one of her biggest movies, though she refused to talk about it, saying it will be a ‘surprise’. She has also accepted a script to star in a student horror movie, titled: “Graveyard”, to be produced by Peace Films.