I left my banking job to follow my passion MzGee 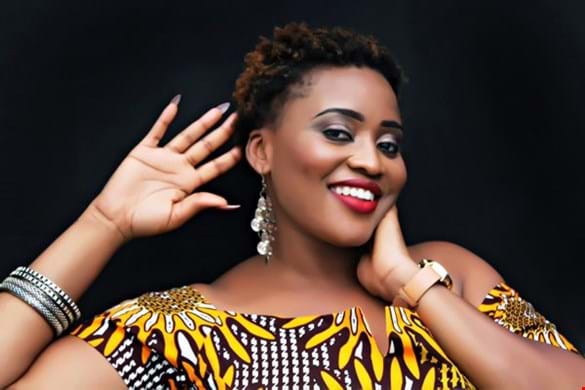 Host of Hitz FM’s Showbiz This Week has said in an interview with Showbiz that she left her banking job of two years to pursue her passion.
She said although it was a difficult decision to take because she didn’t know what the ‘new territory’ had in store for her.
“I left my job at the bank not knowing what I was going to do but I knew I was going out there to follow my passion and knew someone would notice my worth and capabilities.
“ It took a lot of sacrifice because I was not paid for a year at Hitz FM but I was determined and I am glad my sacrifice has paid off”, she revealed.
On what has being her highest moment in her career, she mentioned that her story about Yaw Siki which received massive response from the public is her biggest story yet.
She said the impact the story made was overwhelming.” I like to tell the entertainment stories that no one is telling. If I say I don’t do glamour stories, then I’m a liar but that is not my focus because I want to make an impact at the end of the day.
“The Yaw Siki story got a quick response from the public including Sonnie Badu coming in to lend a helping hand to him. That is the kind of stories I will like to be telling.
“Those that make an impact or can change someone’s life. It’s unfortunate he turned down the offer but he’s an individual and he has his personal reasons for doing that and I respect that”, she said.
In the entertainment industry, it is not rare for rumours of women sleeping their way to land jobs to crop up and one lady who has fallen victim to such rumour mongering is radio and TV personality, MzGee of Multi Media Broadcasting.
But the fast rising radio and television host debunks the stories making the rounds that she is where she is right now because she slept with her boss, Mark Okraku Mantey.
MzGee, real name, Gloria Akpe Nyarku said she’s outraged by the rumour because it is contrary to what she believes in.
“I am not a perfect person but I have a rule. My rule is I don’t give sex for jobs because I don’t want to feel like I am not good enough for the job because I got the opportunity of sleeping with the boss”, she said in a chat with Showbiz.
MzGee started as a producer for Campus on Hitz in April 2014 and later became the substantive host of the show by August that year. By February 2015, she was the bench for Hitz FM’s flagship show, Daybreak Hitz and was then put on the entertainment desk as a reporter in May that same year.
Through hardwork, she was made the entertainment news presenter on the prime time news with Isreal Laryea.
Additionally, she was given another slot to host a four-hour Saturday morning show, Showing This Week in June 2015.
Recently, MzGee was selected by management of Multimedia Broadcasting to cover the just ended African Movie Academy Awards (AMAA) which was held in Port Harcourt, Nigeria.
Probably, for a relatively new face in the entertainment industry, these developments came as a surprise to many, the pace at which she has risen in her career in two years, hence the purported rumour.
“ I learnt something early in life that if you sleep for a job, you will have to keep doing it to maintain and that is not something I will want for myself”, she added.
MzGee said she was introduced to Mark Okraku Mantey by Nathaniel Attoh and was given the opportunity like everyone else to prove her worth.
She said though she was not perturbed by the rumour, she felt insulted by it. “It was insulting because people who do not know me or what I was capable of doing decided to say things that were absolutely false”, she stated
MzGee’s career in radio started during her days as a student at Cape Coast Polytechnic with campus-based radio station, Eagle FM as a brunch time host and later Oceans TV.
MzGee’s effort also helped veteran actor, William Addo who was suffering from cataract to get funding from the public for an eye surgery earlier this year.
The native of Fodome in the Hohoe district in the Volta region said though she is not intimidated by anyone in the creative industry, there are many whose style she admires such as Caroline Sampson, Berla Mundi, Jessica Opare-Saforo and Anita Erskine.
According to her, Nana Aba Anamoah has been her biggest inspiration. She recalled moments when Nana Aba Anamoah was one of the few people who believed she could succeed in the industry after she was ‘evicted’ from TV3’s reality show, The Hottest Host.
“I will forever be grateful to her. After the reality show, Nana Aba picked up her phone to make calls to people to help me and though it didn’t work out, I’ll always be grateful to her for that gesture because her faith in me made me believe I will make it”, she added.
She has had the opportunity of hosting events such as the Ghana DJs Awards and the red carpet of the Radio and TV personality (RTP) awards last year.
MzGee who holds a Bachelor of Science in Marketing from GIMPA and HND Marketing from Cape Coast Polytechnic is the first of four siblings.
The bubbly presenter who is in her early 30s advised young girls not to sleep their way to land jobs because it won’t you don’t have the talent to back it.
“I advise young ladies to work hard follow their passion and someone will notice that hard work. Follow your passion but be ready to serve and most importantly, don’t sleep for a job” she concluded.

My love for Nana Addo has increased–Bibi Bright 8

Ghana's Most Beautiful 2019 launched in Kumasi 20