Goodies’ Docket Forwarded To A G 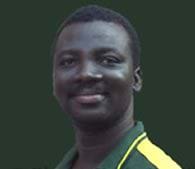 The 80 pellets of substance expelled by Isaac Abeiku Aidoo aka Goodies, a popular music producer, tested positive to cocaine when examined by the Ghana Standards Board (GSB). Assistant Superintendent of Police (ASP) Edward Ansah told the Greater Accra Regional Tribunal on Tuesday, June 24, 2008 that the docket of the case has been forwarded to the Attorney General (AG’s) office for perusal and prosecution. Aidoo is facing charges of attempted exportation of 80 pellets of drugs suspected to be cocaine and possessing narcotic drugs without lawful authority. The court, presided over by Justice Frank Manu, a High Court Judge with additional responsibility as a Circuit Court Judge, did not take the plea of Aidoo. Aidoo, who did not have legal representation, was remanded into prison custody to re-appear on July 21 to enable the AG to start the prosecution. According to the facts before the court on April 23, Aidoo arrived at the Kotoka International Airport at about 2245 hours to board a Ghana International Airlines flight to London. The prosecution said while going through departure formalities, operatives of the Narcotics Control Board suspected Aidoo of carrying drugs in his stomach. He was therefore escorted to the 37 Military Hospital for X-ray, which revealed that he had foreign materials in his stomach. Aidoo was arrested and put under surveillance until he expelled 80 pellets of whitish substances suspected to be cocaine. During Police interrogation, Aidoo said one Abdul Haid, a musician residing at East Legon in Accra, gave the drugs to him to be delivered to one Willie for a fee of 3,000 dollars. The prosecution said he, however, failed to lead the Police to arrest the said Abdul.