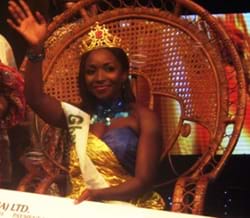 Nana Ama Agyeiwaa, 20, representing the Eastern Region was crowned winner of the 2010 Ghana's Most Beautiful cultural reality show at the National Theatre Sunday night, beating five other finalists. Known in the show as Ama, the new champion hails from Akyem-Oda, and succeeds Nasara who won last year's show. Nasara's reign was however controversially truncated when she was stripped of her crown by organisers, TV3, for alleged misconduct. Sunday's finale saw six contestants who made it from a list of 10 in an intense 12-week studio competition and as per the theme of the reality show, had to impress judges and the viewing public with exciting cultural performances from their respective regions. The final six; Asibi, Chaana, Emefa, Ama, Bambi and Naa had high hopes of wearing the coveted crown as the stage was set for them to battle it out. The finalists displayed their beauty on the cat-walk, modelling African, dinner and casual wears to the delight of many who attended the finale and clearly brought out the fact that it was going to be a keenly contested finale. Things heated up after judges; Linda Ampah, Efo Kojo Mawugbe and a guest judge, Nana Akua Okyeremaa I, Queenmother of Aburi tested the intellect of the six through a question and answer session. The six finalists also performed traditional dances from their respective regions to convince the judges, the viewing public and voters that they are the best fit for the crown. The painful eviction was not to be left out of the show; Naa and Emefa, Greater Accra and Volta region representatives respectively, fell victims as they bid farewell to their four colleagues to vie for the crown. The four finalists now had the final task of wooing investors to their respective regions and that was followed by the judges' final comments. After all was said and done, Ama was crowned winner of the reality show which was in its fourth season. She walked home with a KIA Picanto car, GH¢5,000 and a supply of two pieces of GTP wax prints every month for one year. Central region's Bambi came second and she got GH¢4,500 and souvenirs from sponsors. Asibi from the Upper East and Chaana who represented the Upper West region took the third and fourth place respectively. For their prices, Asibi got GH¢3,500 and a month's supply of two pieces of GTP wax prints while Chaana on the other hand walked away with GH¢2,500 and a hamper from Cowbell. The night was not only about beauty; some of Ghana's renowned musicians, Nana Boro, Slim Buster, Sherifa Gunu, Akosua Agyapong, Kesse, Nii (Project Fame) among others took turns to treat the packed audience to exciting musical performances.