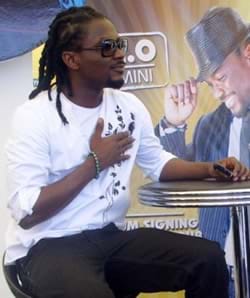 Controversial dancehall and ragga artiste, Emmanuel Andrews Samini, popularly known as Samini, whose romantic and sex life has constantly been in the news, is at it again. Speaking on Day Break Hitz on Hitz FM with Lexis Bill on Wednesday, Samini dropped a bombshell - that he has dated countless number of women and that he started dating when he was in primary school. Asked how many girls he has dated, Samini was blunt: “I can’t count. As long as I have known myself, since class three to today, I have always had more than one girl at a time.” He recounted that when he was even in class one, he used to do class assignments for his girlfriend. “When I was in class one, I used to take my girlfriend’s slate and write 1 to 20 that they’ve given us, the assignment. I will write mine, put my slate down, take my girlfriend’s slate and write everything for her from 1 to 20.” Samini disclosed that the story behind his hit song Sweet Mistake, released early this year, is a general occurrence that could happen to anybody and that “in my situation, if you listen to the song carefully, I wasn’t busted…” Recently it was widely reported that he was married to two women but when he was asked how many women he is currently with and possibly married to, the Sweet Mistake singer said, “I have got more women…I have not concluded the number yet, am still counting,” adding that in terms of marriage, “I am affiliated to all the women affiliated to me…still counting.” He also said he has three kids and also still counting. Asked how many times he has sex in a week, Samini’s reaction was swift saying, "I don’t really count the number of times I have sex but I have sex when I am with the one that I have to have sex with…I would want it any time I want it, any time I need it. After a hard day’s work, lion has to be tamed so he can lie down calm.” From a humble beginning of a music career that started in church when he was a kid, in 2004, Samini, then Batman, had his hit song Linda disqualified from the 2004 edition of the Ghana Music Awards because it was alleged that some lines in the song were sexually suggestive. Several years after, he has won several awards including Best African Artiste at the 2006 Music of Black Origin (MOBO) Awards and the 2009 MTV Africa Music Awards (MAMAS) Best Performer award.