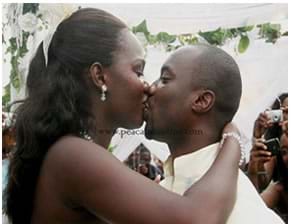 Silky voice contemporary high-life crooner Kwabena Kwabena, real name George Kwabena Adu, has tied the knot over the weekend at the forecourt of His Majesty's (HM) in La, a suburb of Accra. The less publicized event which appeared to be strictly for family members and close associates, began in the afternoon of Sunday December 12, and traveled late into the evening. The day saw Kwabena Kwabena and his true-love Abena Owusuwaa being joined together in holy matrimony. Peacefmonline.com investigations unearth that the two got engaged in a brief ceremony at the residence of the singer’s new mother-in-law. Unlike the usual wedding ceremony held in churches, the couple then proceeded to HM where they exchanged vows, rings and received blessings by a priest to officially become husband and wife. The newly wedded couple, with excitement written all over their faces, shared passionate kisses to affirm their endless commitment to each other. Some of the dignitaries present at the “Asor” singer’s special day included: New Patriotic Party (NPP) flagbearer, Nana Addo Dankwa Akufo-Addo and his wife Rebecca, former MP for Ablekuma Central Kwamena Bartels, Kofi Okyere Darko (KOD) of Radio Gold, Special Aide to former President Kufour, Mr. Kwakye, NPP MP for Evalue-Gwira, Catherine Afeku, Lawyer Nana Asante Bediatuo, NPP MP for Manhyia Dr. Mathew Opoku Prempeh, Frances Essiam among others. Kwabena Kwabena first met Abena who is believed to be a staunched NPP youth activist and once worked as a staff of Nana Akufo-Addo during the 2008 electioneering campaign. That was when the sultry singer was signed on by the then ruling NPP as one of the music icons for their campaign. Kwabena had by then parted company with his first wife, Esther. The two (Kwabena and Esther) got married at the Trinity Presbyterian Church, Kwashieman in Accra, but went their separate ways barely a year into the marriage. When the marriage was dissolved, Esther allegedly blamed Kwabena’s alleged love affair with Abena as the genesis of her marital woes. But Kwabena Kwabena rather blamed the breakdown of the marriage on his ex-wife Esther who he claims gave too much ear to tale bearers. He said Esther often worked herself into a frenzy over things people tell her, which were mostly false. According to Kwabena Kwabena, when the former wife could not bear the pain she was persistently inflicting on herself, she carried the tales which she interpreted as bad treatment to other family members. That marriage was blessed with an issue though, a male child to be precise. Meanwhile, he is reported to have a child with another lady called Priscilla, a resident of Pigfarm, a suburb in Accra. Born in Accra on 17th October 1978, Kwabena Kwabena attended Datus Complex situated at Bubuashie and when the family relocated to Achimota, he enrolled at Green Hill School and later to Aggrey Junior Secondary School for his basic education. He completed St. Peter's Secondary School in Nkwatia Kwahu in the Eastern Region some years back. For his Tertiary Education, Kwabena Kwabena schooled at the Accra Polytechnic. The “Donobi” hitmaker has three albums to his credit “Asor”, “Dabi” and currently being played on the airwaves “Bibini”. For now Kwabena Kwabena is happily married to black beauty Abena Owusuwaa. Aside their name Abena and Kwabena, which means they were both born on a Tuesday, the two love birds also share something in common. They both have a son from their previous affairs. Peacefmonline is reliably informed that Abena had a son with Board Chairman of the Ghana Sports Council and Publisher of Agoo Magazine, Kojo Bonsu. Peacefmonline congratulates Kwabena Kwabena and his new wife, now Mr. and Mrs. Adu.