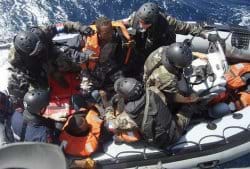 One of the Ghanaian hostages, Francis Koomson Snr, being held captive by Somalia pirates could be executed today. Koomson, who is one of four Ghanaians being held on the MV Iceberg 1 off the Somali coast, is making a passionate and urgent appeal through Citi FM to the President of Ghana, Prof. John Evans Atta Mills and all well meaning Ghanaians across the world to come to his aid. The pirates have already executed two non-Ghanaians in the past four days and in the next few hours the fate of the Ghana national hangs in the balance. They have been in captivity for the past two years. Fifty-year-old Koomson told Citi News on Tuesday from their Gulf of Aden base that the pirates are angry that the one million dollar ransom they demanded has not been paid. He said he is due to be slaughtered by the pirates in a matter of hours. “Please I want the whole nation if possible to talk to this man [pirate] right now to stop their action and the government of Ghana should take over," a desperate sounding Koomson said. “Give them the ultimatum that stop this and I would take over the case as soon as possible because we have some few hours left. “We’ve done no wrong, we were doing our job and the ship was pirated, there is nothing wrong that we have done. Fellow Ghanaians pray for our dear lives if our government cannot do anything for us. Pray for our dear lives because we don’t have time." Koomson continued: “The time is limited, so I want the government of Ghana to intervene right now because I am the next person to go. “They gave me the phone to talk to my family, anywhere that I want to call so I talked to my family, I told them to pray for me, have faith in the Lord. “I would just tell President Mills to look up to God and assist us because we have done no wrong and we are Ghanaians. I want His Excellency President Mills to talk to this people and give them the assurance that they should hold on to whatever plans they are making and he would take over the case. “If the President talks to them, they may hold on. ” Other Ghanaians being held hostage include Edward Kofi Asare, Jewel Amiable and one other whose identity is not yet known.