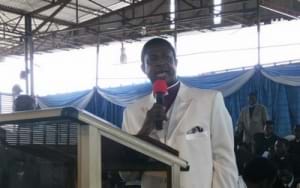 Apostle Amoani Speaking at the function


The Christ Apostolic Church (CAC) International has been granted accreditation to run a university degree programme from academic year. The Church has also embarked on a programme to establish basic schools and health centres in selected regions as its social responsibility to support government. Apostle Samuel Steven K. Amoani, the Chairman of the CAC International, when he addressed his congregation at a Prophetic Convention at the Trade Fair at La in Accra. The one-week convention, which is held every two years, was on the theme: “Possess Your Possession” and was attended by about 12,000 members from Ghana, Togo, Cote d’Ivoire and the US. Apostle Amoani said apart from taking active part in re-moulding the character and lives of the citizenry, as well as providing employment for hundreds of Ghanaians, the church since 1971 when it was established been involved in various social activities especially in the area of education where it can boast of many basic schools scattered across the Regions. Some of the schools, named Christ Apostolic Complex Schools (CASCOM) are located in Takoradi, Berekum, Dormaa Ahenkro, Kumasi and Kasoa. In addition, he said, plans were far advanced for the proposed health facilities also to be named after the church to take off in selected regions. “As a church, we think we owe it as a duty to join forces with the government as development partners to ensure the social, political and economic growth of our country,” Apostle Amoani said. “We should also shun ethnicity, nepotism and discrimination and see ourselves as one people with a common destiny. All divisive tendencies resulting from chieftaincy, land and all other disputes should be done away with and let us clothe ourselves with peace, the fear of God, hard work and commitment to the course of Ghana’s development and growth.” Nii Armah Ashietey said the church should not only be there to pray but also assist the needy in particular to realize their socio-economic aspirations. “I want to urge our Apostles that in preaching the good news about Christ to the congregation, the Church should constantly speak out against prostitution, crime, violence, rape, marginalization of the weaker and vulnerable groups.” He said though the Ghanaian, generally, was humble, in recent times modest, God fearing hospitable, caring and friendly,’ “Sadly, these values in recent times are giving way to personal aggrandizement and indecent behavior. The spirit of vanity is taking millions into captivity. As a result, immorality, dishonesty, robbery, abuse of office, mistrust and lust for power are the norm and order of the day”, he added.