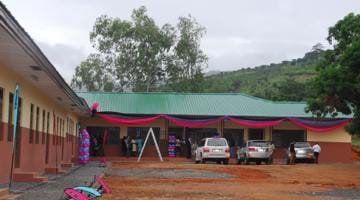 The Basic Education Certificate Examination (BECE) pass rate for the Odumase Presby Junior High School (JHS) shot up from 43% to 100% after Zain Ghana rebuilt the school into a state-of-the-art edifice. The old school building, part of which collapsed and killed one of the pupils and injured two others last year, was reconstructed to include a computer lab and a fully stocked library by the telecom company. Due to the retched state of the school structure, a little less than half of the cnadidates presented yearly at the BECE managed to obtain good grades. But the endless cycle of poor performance was broken when last year’s best aggregate of 17 was reduced to 12 this year. For the first time in 13-years, all candidates presented for the this year's BECE emerged with grades good enough to earn them places in senior high schools. This has raised the hopes of school authorities, parents and the entire community. Headteacher Nene Seth Aryertey admitted “we are stunned at the speedy effect of the new facility and its accompanying ambiance on the performance of the students; they seemed to have gained some confidence which is really urging them on for success.” “The swift gesture by Zain did not only save lives but impacted positively on an entire generation and so will it impact on many more to come,” he said when officials of the company visited the school. He added that “we have already set in motion several plans that will ensure that the 100% feat is sustained and even improved upon with single grades in the subsequent batches who would have adequately benefited.”