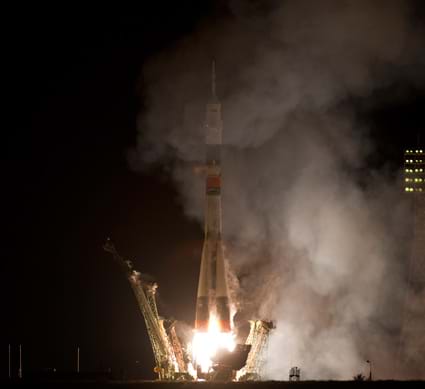 NASA astronaut Scott Kelly and Russian cosmonauts Oleg Skripochka and Alexander Kaleri launched in their Soyuz TMA-01M spacecraft from the Baikonur Cosmodrome in Kazakhstan Thursday at 7:10 p.m. EDT (Friday, Kazakhstan time) beginning a two-day journey to the International Space Station. Less than 10 minutes after launch, their spacecraft reached orbit and its antennas and solar arrays were deployed. The trio will dock to the Poisk module Saturday at 8:02 p.m. completing the Expedition 25 crew. Kelly, Skripochka and Kaleri will begin a five-month tour of duty aboard the orbiting laboratory. Welcoming them aboard will be current station residents, Expedition 25 Commander Doug Wheelock and Flight Engineers Fyodor Yurchikhin and Shannon Walker. Wheelock, Yurchikhin and Walker arrived June 17 aboard their Soyuz TMA-19 spacecraft.

Cybercriminals are using Google reCAPTCHA to hide their phishing attacks 232

Facebook is getting a major redesign, and you can switch to it right now 53