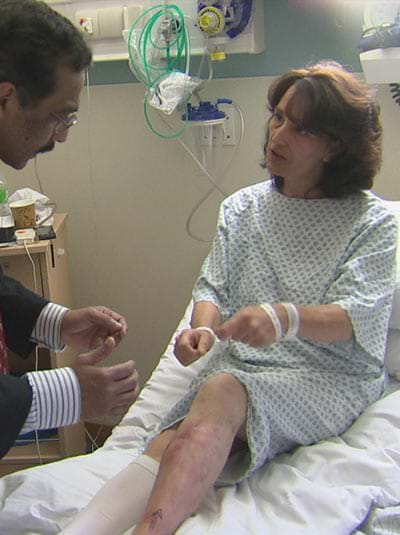 
A groundbreaking surgical technique has been used to rebuild the leg of a woman who suffered a bad break in a hit-and-run accident. Diane Stuttard had been told she would have to have her leg amputated after 11 operations failed to fix her bones. But in a world first, surgeons used her own stem cells to repair the damage - and lengthen the shattered limb. "I was advised to have the leg amputated by the surgeon in Leeds, but thankfully I said I wanted to wait until I had exhausted all avenues," she told Sky News. "I'm glad I did because this stem cell technique has come up and now it's my chance to get it right." It would be absolutely amazing to walk down the street without crutches and get back to some form of normality. Diane was hit by a car while walking home after a night out in 2001. She was carried on the bonnet for three-quarters of a mile before being pushed off by the front-seat passenger. Her left tibia and fibula - her lower leg bones - were badly broken. Scans revealed that 6cm of her bone had become infected and died, preventing the fracture from healing. In a pioneering operation at the Spire Alexandra Hospital in Kent, surgeons first removed the dead tissue, then clamped Diane's shinbone back together. They then took a sample of bone marrow from her pelvis and purified stem cells. Diane: 'I want to go walking, and mountain climbing.' These were mixed with Surgifill, a unique gel that traps the cells against the fracture. Within days they start to form healthy new bone, healing the break. To lengthen Diane's leg surgeons then had to cut into a healthy section of bone, inject more stem cells into the break, and then use a hi-tech scaffold to gently pull apart the bone so that it grows one centimetre a month. Orthopaedic surgeon Mr Anan Shetty is optimistic about her chances of making a good recovery. "I feel it's pretty good," he said. "I am confident the fracture will join up. We managed to cut out all the dead bone and get into bleeding bone, which means that it is healthy. "We also managed to use stem cells that will stimulate the bone to grow quicker." It is the first time the combination of stem cells, Surgifill and the leg-lengthening technique have been used. Diane contacted Mr Shetty after seeing a Sky News report about an earlier operation in which he used stem cells to save the leg of a climber. It will be 18 months before surgeons can be sure that Diane's bones have properly healed. Diane says it is her last hope. "If this doesn't work, it would have to be an amputation," she said. "But I've not wanted to give up. There is so much I want to do. I want to go walking, and mountain climbing. "It would be absolutely amazing to walk down the street without crutches and get back to some form of normality."

Cybercriminals are using Google reCAPTCHA to hide their phishing attacks 636