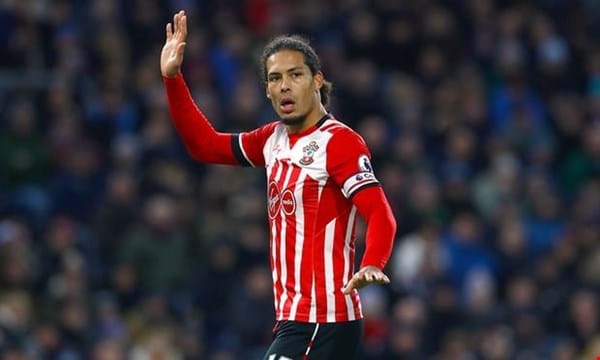 The Netherlands international had been expected to join the Reds last summer after he handed in a transfer request.

But a move fell through when Liverpool apologised for making an alleged illegal approach for the 26-year-old.

The fee is the most ever paid for a defender - Manchester City paid £52m to Monaco for Benjamin Mendy in July.

Van Dijk said in a statement he was "delighted and honoured" to sign for the Merseyside club.

He was left out of Southampton's squad for their 5-2 defeat by Tottenham on Tuesday, prompting speculation he was set to leave the club.

The player only signed a new six-year contract last year, having joined the Saints from Celtic for £13m in September 2015.

However, Liverpool's interest in the summer prompted a transfer request from the player which saw him forced to train alone by manager Mauricio Pellegrino.

He returned to first-team action in September, featuring in a win at Crystal Palace.

Van Dijk's former club Celtic will benefit from the record transfer fee - the Scottish champions are understood to have had a 10% sell-on agreement on any future transfer.

Though he will join the club on 1 January, Van Dijk will not be able to register as a player until 2 January so will not be available for Liverpool's trip to Burnley.