Gyan Can "Get Bigger And Bigger" | Paintsil 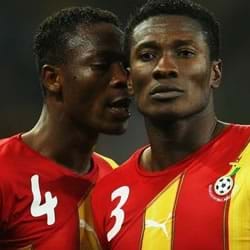 John Paintsil believes Asamoah Gyan can elevate himself into the leading pack of attackers in the Barclays Premier League. Gyan recently moved to the Premier League after completing a club record deal by Sunderland from Rennes in France. The Fulham defender was delighted to see Gyan score on his English debut and holds the conviction that his national teammate can 'get bigger and bigger.' "He's going to do well and I was happy to see him scoring on his debut," Paintsil said as he assessed how Gyan would fare in England. "He's a young player and he has a bit to prove in England to show that he deserves to be there, but I think he's going to get bigger and bigger."