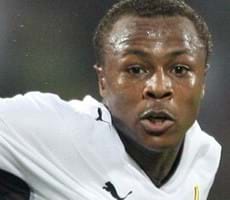 
Ghana’s coach Goran Stevanovic says the decision to exclude in-form Andre Dede Ayew from the squad that played Sudan was motivated by a prohibitive FIFA law while goalkeeper Richard Kingson has been left out because he is clubless. Countries must inform clubs of their decision to invite players for international matches at least 14 days before a game. At the time European clubs were notified of Ghana's decision to invite their players for the Sudan game, Ayew was suffering from a groin injury. The list was submitted on September 24, to meet the timeline for the match on October 8. Four days after the deadline had elapsed, Ayew recovered to play for Marseille in their Champions League clash Dortmund and he excelled by scoring two goals. The Serbian manager says Ayew's exclusion was because of fears that he could not be fit to play in the game in Omdurman. “Dede was injured weeks before the Sudan game and I must submit the list to clubs at least two weeks before,” Stevanovic said. “I could not be sure if he would recover in time for the game and I think I made the good choice.” Stevanovic insists the Marseille youngster has not been axed from the team and could be in line for a call up in the next game. “For me I don't see any problems with the players who missed the squad this time because the next time other players can be called,” Stevanovic said. This is not the first time Stevanovic has been faced with a problem with Andre Ayew's injury. The Marseille player was part of the team Stevanovic invited in his first game in charge during their friendly with Togo in Belgium earlier this year. In the case of Kingson, Stevanovic said it was difficult to invite the goalkeeper who has not played active football since being released by English side Blackpool last June. “For Richard Kingson, he does not have a club at the moment. For a goalkeeper in this situation it is very difficult,” Stevanovic said. Though he did not have a club, Kingson had been the number one until the arrival of goalkeeper Adam Larsen Kwarasey who is considered a competent replacement for the long-serving Kingson.