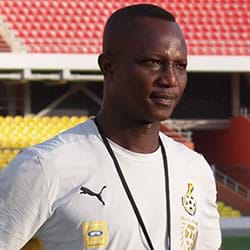 
Black Stars stand-in coach, Kwesi Appiah intends to cast his net wider in his quest to build a formidable team for the future. Coach Appiah will be in charge of the Stars for the first time during next weekend's Orange CAN 2012 qualifier against Sudan at the Baba Yara Stadium, Kumasi; and he tells GNA Sports the doors of the National Team 'A' is open to all eligible players. The soft-spoken trainer maintained the trend of his former boss, Milovan Rajevac, by leaving out notable faces Sulley Muntari and Matthew Amoah for the Sudan clash, but said the move stems from his decision to give other players a chance. "Every Ghanaian playing anywhere qualifies to play for the Black Stars. I have nothing against any player; I simply want to give equal chance to any player who is eligible for the Black Stars." The coach may hand call-ups to other players in the subsequent matches dependent on the tactics for the game. Coach Appiah hinted that he least subscribes to the practice of inviting more foreign players to the national team because "when you call 20-players for a game, only 18 will be available. I won't be comfortable inviting entirely foreign-based players for a game when there are equally capable local players." He said the Black Stars jerseys is not destined for only foreign-based players; insisting every Ghanaian player qualifies to play for the Black Stars dependent on his form. "The local players must know that the Black Stars is for all, and when they play better they would have a chance to be invited to make the team. "We must give equal opportunities to all," said Appiah who has handed surprise call-ups to Kessben FC's left-back Seth Owusu and Emmanuel Clottey of Berekum Chelsea for the Sudan tie. The Stars beat Swaziland 3-0 in the opening Group 'I' clash in Mbabane earlier this month, which incidentally was the last game for the Stars under coach Milovan Rajevac. The Serbian has since joined Saudi Arabian giants Al Ahli, a scenario which has compelled the Ghana Football Association (GFA) to elevate Appiah to the top seat whilst the appointment of a replacement intensifies. The former Black Stars captain deputized for Rajevac during his two-year tenure as Ghana coach.