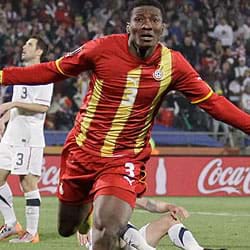 Sunderland manager Steve Bruce expects Asamoah Gyan to make a big impact when he finally settles into the Premier League. The Ghana striker, Sunderland's £13.5 million record signing from Rennes is yet to start a premier league game with England international Darren Bent being Bruce's preferred choice ahead of Gyan. Bruce insists he will not be rushed into playing Gyan in the Premiership, rather he will ease him into his side gradually as he sticks to his system by playing one striker up front. "There will be a time when we do it, of course. But the team is playing very, very well and the team comes above anything. It is quite rare now in the Premier League, for instance, to see any team playing with two." "I had no hesitation in paying the money for him [Gyan]. What it has enabled me to do, though, is let him have a little insight into England. It has enabled me to let him come to the club and quietly let him settle in. Believe me, he will have a big impact when we unleash him," the Sunderland manager said about his record signing. Gyan scored ion his league debut when he came off the bench against Wigan.