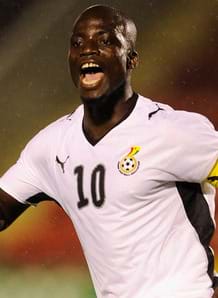 
Stephen Appiah has revealed he would love to manage Ghana one day, although he has no plans to play for his country again. The 29-year-old midfielder decided to retire from international football after this summer's World Cup because he did not want to stand in the way of younger players. He is happy to focus on his club career with Serie A side Cesena, who have slipped down the table in recent weeks following a run of three successive defeats. However, Appiah admits that he is eager to take charge of Ghana at some point in the future, as long as he has gained enough coaching experience. "Yes, I would love to, but now I am concentrating on Cesena and we will see what will happen," Appiah told Citi FM. "I would love to handle the national team one day. I am not saying the Black Stars because in everything you have to start from somewhere. "Maybe I have to study to be an assistant coach and later work a lot to get that chance to coach the Stars." No comeback Appiah maintains that he does not regret his decision to call time on his playing days with Ghana. "I think that I have done much for my country. I played twice in the World Cup and I have played a lot of games so I think that it is time to give a chance to the young ones. "Our legends like Abedi Pele, Tony Yeboah, Gargo Mohammed, Osei Kufuor, Augustine Arhinful, Yaw Preko and the rest, they paved the way for us and we did our best so that's what I thought of and decided to retire from international football. "I have decided, so I don't think about it that much. I am still enjoying my time in Cesena for now."