Wife: Onetouch Girl Is A Witch 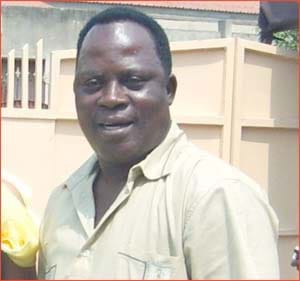 
Akosua Agyeiwaa Twumasi, wife of Prophet Nana Kofi Yirenkyi, aka Jesus Onetouch, yesterday disclosed to an Accra Circuit court that the ten-year-old daughter of the prophet who accused her father of having sex with her was a witch. The lady, who is a secretary at Parliament House, said the victim had walked to her one day and confessed that she was a witch and that she had been sent by her mother and grandmother to destroy her fat her. She said the child even told her that she, together with the two (mother and grandmother), had attempted to spiritually attack her (Akosua) with an object the previous night but they saw a light around her and as a result, abandoned their mission and fled. Agyeiwaa said she informed her husband about this. Agyeiwaa further alleged that whenever the victim was playing with the children, she told them she was a queen somewhere and that nobody could do anything to her. The woman, who has four children by Onetouch, including a little baby named Junior Jesus, testified in the case in which her husband was standing trial for allegedly having sexual intercourse with his own daughter. Under-cross examination by Chief State Attorney, Mrs. Helene Kwawukume, the prophet’s wife indicated that they prayed for God to help the child, when she was asked what the husband, who is a prophet with powers to cast out such demons, did about the child’s condition. When the prosecutor put it to her that the story of the victim being a witch was concocted to assist her husband, the woman answered, “I swear by the Bible, the victim told me herself.” She also said she could never come to court to defend her husband if she knows that he was a “beast” because she also had children by him. She swore that her husband was innocent of the two charges of defilement and incest. Led in evidence by counsel for the prophet, Paul Owusu, the wife narrated how she first met the victim, saying one day, the husband called her and informed her about the child and her mother.Her husband told her the victim’s mother had come to him to request that the victim came to stay with him. She agreed but the child went to live with Onetouch’s sister for a year until the girl’s aunt reported to them that the child was always wetting her bed. In view of this, Akosua Agyeiwaa allowed the child to come and stay with them at their residence at Menskrom. Agyeiwaa, who said the relationship between her, the victim and victim’s mother had been cordial, indicated that during the period the victim came to live with her, she tried to help the child by advising her not to drink too much water. The victim’s mother later came to take the child away in their absence without informing them. The husband tried on several occasions to bring the child back but to no avail. She talked about her husband’s invitation to Odorkor Police Station for allegedly defiling his daughter. She said she went with her husband to Akropong where the case was lodged and was also in the office of the commander when the victim’s mother confessed that the victim rather mentioned one Efo as the one who had been inserting his fingers into her vagina. Agyeiwaa described Efo as a man who was healed by her husband from a boil he had been suffering from for 17 years. Efo decided to be the pastor’s watchman. Efo, she said, slept in a net, which was in the form of a tent, on their porch. The pastor’s wife confirmed that it was Efo who inserted his finger in the vagina of the victim, and has reported to the SCC police station. She also confirmed that her husband was a busy man and that there was no day he stayed in the house on Tuesday with the victim alone, as he normally left home around 4 am and returned around 10pm. The prophet’s wife also confirmed the story t hat the children had a separate car that sent them to church on Sundays. The victim and her other siblings also slept in one room. Mrs. Kwawukume had put it to her while undercross examination that the Efo story was a fabricated one and that there was no entry at SCC which stated that such a case was reported, but she disagreed. After her testimony, 16-year-old Kwame Asare, a nephew of the accused, also testified. He told the court that he was the one who saw Efo Emma with the victim in the net and reported to Onetouch. He agreed with most of the stories already told in court by the prophet and his wife, including the allegation that Efo slapped TT, Onetouch’s step-daughter on the buttocks and vagina. This revelation exposed the relationship between the victim and Efo. Asare also confirmed that Efo confessed ‘fingering’ the child in the presence of the whole family, after which they reported the matter to the police, but he escaped the following morning.