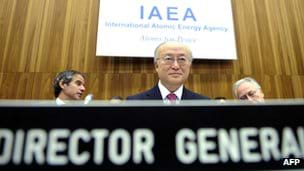 The head of the UN nuclear agency, the IAEA, has proposed sending a high-level mission to Iran, to address new fears about a possible military dimension to the country's nuclear programme. IAEA Director-General Yukiya Amano said there was credible information Iran had carried out activities relevant to the development of a bomb. He said there might be undeclared nuclear material and activities. Tehran says its programme is for peaceful purposes. The International Atomic Energy Agency's governing board has been debating the latest report on Iran released last week in the Austrian capital, Vienna, where it is based. "Our technical experts have spent years painstakingly and objectively analysing a huge quantity of information from a wide variety of independent sources, including from a number of member states, from the agency's own efforts and from information provided by Iran itself. The agency finds the information to be, overall, credible," Mr Amano said in a statement. "It is consistent in terms of technical content, individuals and organisations involved, and timeframes. The information indicates that Iran has carried out activities relevant to the development of a nuclear explosive device." He hoped a date for the visit would be agreed soon, he added. The United States and its allies want to see stronger sanctions imposed on Iran, but Russia believes the report contains no new evidence - and could hurt the chances for diplomacy, says the BBC's Bethany Bell in Vienna. China says sanctions cannot resolve the issue. 'Accident' On Wednesday, Iranian General Hassan Firouzabadi said that - contrary to speculation - the US and Israel were not behind a weekend munitions base blast that killed 17 Revolutionary Guards, including a key ballistics missile expert. "This recent incident and blast has no link to Israel or America, but the outcome of the research, in which the incident happened as a consequence, could be a strong smack to the mouth of Israel and its occupying regime," Gen Firouzabadi was quoted as saying by the student news agency Isna. Iranian officials had previously said the accident happened while munitions were being moved at the base, without linking it directly to weapons research. Brigadier General Hassan Moqaddam, who was considered a key figure in Iran's missile programme, was the most senior casualty in the incident.