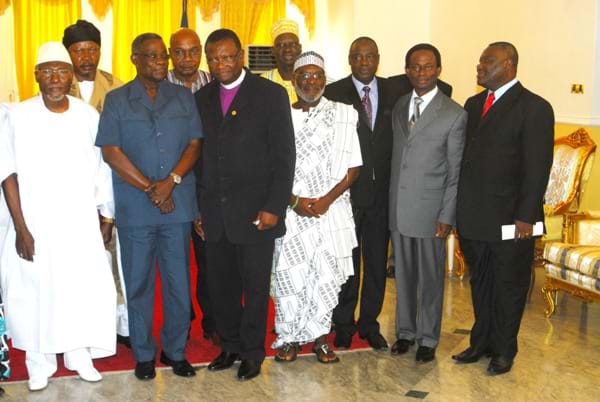 President John Evans Atta Mills on Thursday charged the newly constituted Board of the National Peace Council to use the law to protect national peace and deal with elements that had the tendency to destroy society or foment trouble. He observed that despite the relative peace Ghana was now enjoying, the Board should use the appropriate legal means to bring any political party, the President, Government, traditional authority or any individual who threatened national peace to book. Inaugurating the 13-Member Board at the Osu Castle in Accra, President Mills said peace should not be taken for granted because it is a pre-requisite for national development. "You have the legal right to bring all of us together," President Mills told members of the Board. He said despite Ghana's stability in West Africa, there were still pockets of instability and disunity that threatened national peace. President Mills cautioned those who made careless statements that could lead to violence and instability or incite people into violence and bloodshed to cease from the act. He asked Ghanaians to avoid the worrying sight of people carrying buckets and blankets in search of refuge and added that "When I see people carrying these... I tell myself, may God forbid that we in Ghana will find ourselves in this," he added. President Mills called on the people to maintain the peace and said Ghana was more important than any particular person or group who seek violence to become popular. He cautioned against verbal violence or intemperate language that could result in rouble for the nation and said: "Let's show that we are one people with a common destiny,". Most Reverend Emmanuel Asante, Chairman of the Board, thanked President Mills for offering the members the opportunity to serve the nation and pledged their full commitment to the assignment. The Interior Minister, Dr Benjamin Kunbour, said the Ministry would support to the Board to discharge its duties effectively.