Time Is Of The Essence For Africa | President Mills 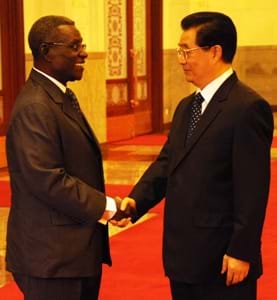 
President John Evans Atta Mills on Tuesday urged African diplomats in the People's Republic of China to bring China's development "miracle" to bear on their respective countries on the Continent, stressing that Africa cannot afford any further delay to accelerate her own development. He said time was not on the side of the Continent to continue getting mired in endless conflicts to the detriment of her development, and called on African leaders not to allow anyone to drive a wedge between them. President Mills made the call when he met with African Ambassadors in Beijing on Tuesday, on the third day of his five-day state visit to China. He acknowledged the massive economic transformation in China within the last three decades, and wondered why Africa's development had been slow despite the continent’s vast natural and human resources. President Mills appealed to the Ambassadors to take advantage of their presence in the Asian nation to study the operations of the Chinese system and apply their experience in practical terms to the development of their home countries. He registered his appreciation to the Chinese government for the impressive reception accorded him and his entourage -comprising Ministers of State, Ghanaian investors, entrepreneurs and business people - since their arrival, and explained that the Chinese development experience was a demonstration of what could be achieved in Africa with focus and unity of purpose. President Mills reiterated his message that the only justification for being in leadership was for governments to provide the right environment for their citizens to thrive and to use the resources of the state to improve the standard of living of the people. Stressing that African leaders had to interact regularly to exchange ideas, President Mills called for more cooperation and collaboration among nations on the continent and more intra-African trade to bridge the development gap between Africa and the developed world. He announced that his Administration was charting a new path of development under the "Better Ghana" agenda, and called on leaders to subject their individual interests to the national interest and to ensure that they did not abandon the very people who elected them into power. Later in an interview with the China Central Television, President Mills expressed Ghana's interest to collaborate with the host nation in the area of sports. Ghana, which emerged as a quarter finalists in the recently held FIFA World Cup soccer competition in South Africa, would make available her expertise in football and expect China to coach her in gymnastics, President Mills indicated.