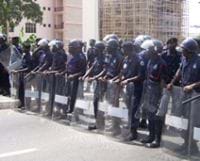 Bound To Protect Us


After being allegedly assaulted by six armed policemen at her residence at Yawhima Shooting Range, near Sunyani on Sunday night, Cynthia Gahe, aka Sister Akos is in severe pain. Eye-witnesses say Sister Akos was rendered naked after the dress she was wearing was torn by the irate policemen who stormed her house to arrest her brother, one Kwadwo aka Blackee, for threatening a police officer who stays in the neighbourhood. The poor woman, according to residents, was given some slaps which landed her on the floor, and was dragged on the floor by the policemen who assaulted her for allegedly obstructing her brother's arrest. Residents who attempted to rescue the defenseless lady from the hands of the policemen also had their fair share of the brutality. Asiedu Richard told Daily Guide that his right eye, which was red at the time of the paper's visit to the house on Monday evening, was nearly gouged out by the police when he attempted to save the woman. Kwadwo Manu, a victim who described the incident as a "very terrible situation", said he was slapped by one of the officers when he came upon the incident and decided to enquire about it. The disturbing part of the incident, residents said, was that Sister Akos was detained at the police station overnight after the husband, Luis Gahe, had gone there to lodge an official complaint with the police. Mr. Gahe said his wife, who looked too frail, collapsed immediately after she was released the next morning, Monday, and was rushed to the emergency unit of the Sunyani Regional Hospital. She has since been treated and discharged. Meanwhile, the police have denied any wrongdoing. The Sunyani Municipal Police Commander, Chief Superintendent Charles Botwe, told DAILY GUIDE that the woman in question tried to obstruct the arrest of her brother who was believed to be hiding in her room at the time the police got to the house, he said even though investigations are still underway, he can confirm that nobody, including the woman, was assaulted during the incident. He explained that one Inspector E.K Nyame of the regional Motor Traffic and Transport Unit (MTTU) lodged a complaint with the police on Sunday morning that Blackee had threatened him after unlawfully entering his house. The police chief said later in the evening, Inspector Nyame called in the Mobile Patrol Unit when he felt insecure because of Blackee's threatening words. When Sister Akos heard that the police were looking for her brother, she hurled all manner of insults on Inspector Nyame. Chief Supt Botwe said the woman rather obstructed justice when she prevented the officers from entering the room to arrest her brother and even went to the extent of picking a coal pot and a pistil to hit the police. He indicated that the woman will be processed for court, whilst the police hunt for Blackee. He has also challenged all the eye-witnesses to come forward to expose the police officers who assaulted the woman. Family members however told Daily Guide that one Lance Corporal (L/C) Khan, who is building a house in the neighbourhood, has been engaging Blackee for construction works on the building. Sources said payments have not been prompt. Reports said Blackee went to L/C Khan's house, where Inspector Nyame also lives, on Sunday evening to collect his money for the service he rendered in the morning, but it led to a confrontation. When Sister Akos was informed, she went there to calm her brother down and she was hit by Mr. Khan's son. which resulted in the trading of insults. According to residents, when Sister Akos was pounding fufu later in the evening, L/C Khan and Inspector Nyame stormed her house with six well-built armed policemen to arrest Blackee. At the time, Blackee was not at home. Sister Akos told Daily Guide that she demanded an arrest warrant from the police but they tried forcing their way into her room to fish out her brother. She was brutally assaulted in the process.