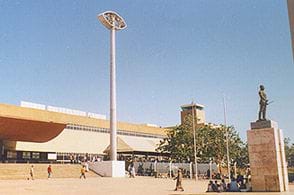 Two airlines on Monday evening crashed at the Kotoka International Airport causing a delay in incoming and outbound flights at the airport. The collision occurred between a German airline, Lufthansa and Turkish airlines. According to Citi News reporter Richard Mensah, the wings of the two airlines tipped each other after the Turkish airline attempted to take off. The Deputy Transport Minister, Dzifa Attivor and some aviation engineers arrived at the scene moments after the accident to ascertain what actually occurred. According to reports some parts of the two airlines are damaged as a result of the accident. In an interview with Citi News the Deputy Transport Minister told Citi News that no fatalities were recorded and added that engineers were working assiduously to ensure that normalcy returns to the airport. She told Citi News that investigations would commence immediately to find out the cause of the accident. “What we saw here was that the Turkish airline was pushing back to fly off and the wing hit the wing of the Lufthansa airline…no casualties have been recorded but there is some bend at the tail wing of the Turkish airline as well as the Lufthansa…we have a safety section under civil aviation and they will be conducting their investigations to find what really happened”. Meanwhile, the Deputy Managing Director of Ghana Airports Company, George Amedio has told Citi News that the Turkish Airline was cleared to fly out of the country an hour after the accident occurred. Mr Amedio asserted that the accident wouldn’t have occurred if standard procedures were followed. He however added that until investigations are completed he will not be able to tell what exactly led to the cause of the collision.