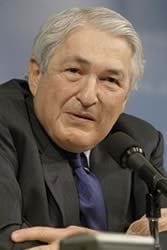 New Twist To World Food Crisis Website
Another cause to the current world food crisis has been identified. When world food prices went high, among the many reasons assigned for the rise, were growing populations, shortfall in production, high demand for animal feed and consumption patterns as well as the use of productive agriculture land for non-food crops for the production of biofuel. Climate change and rainfall patterns were also blamed. But now, an emerging middle class has been identified as one of the causes. This revelation was made by a former President of the World Bank Wednesday May 14, 2008. Sir James Wolfensohn, former President of the World Bank made the revelation when he delivered the 29th edition of the Aggrey-Fraser-Guggisberg Memorial Lectures to commemorate the 60th Anniversary of the University of Ghana at Legon. The title of the lecture was “Our Changing World: Will the 21st Century be the Global Century?” Sir Wolfensoh said “a growing middle class in India and China” is one of the factors that have contributed to the food crisis. This emerging middle class he said demand more food and more resources which are all driving food and fuel prices up. The middle class in India and China he said is expected to grow to about 1.5 billion in the next 15 years. These middle class he said are also demanding for more technology, energy and additional power, especially in China. The phenomena he said is worrying, because it is moving so fast that it is shifting the world balance of economics and power away from Europe and America. These countries’ economies are so strong and they are growing so fast. China’s economic growth rate is expected to be a staggering 10% per annum, and it is feared it might drop to nine per cent this year, while America is expecting a growth of 0.95%. China’s growth rate is huge because even a growth rate of 3.5% is strong enough for any economy. “50 years ago, the world was dominated by Europe and America, but that is changing very fast.” He said. He said the change is so tremendous and fast even in terms of population growth and investment. “By 2050, the world’s population will reach nine billion and twenty per cent of income generated from developing countries would move up to 60% of the world’s total income.” He said the countries leading the trend are; India and China which will become the world’s engine of growth. He noted that a growing number of investors from China and India are now investing in developing countries. This huge shift, he said, has some implications for the world. He however, identified the following challenges facing the world today; these are increasing inequalities; environmental degradation; impact of the middle class and the contradictions in America’s free trade policy. About inequalities, he said, despite the tremendous growth in the world today, there is so much poverty beyond tolerable levels. He said environmental degradation has economic impact as well as affect health and therefore has serious implications for the world. The emerging middle class he said are putting pressure on the world’s resources. He suggested that this new middle class is moving away from traditional lifestyles and eating habits which are affecting available resources. He said while America talks about open market and free trade it is the same economy that is pursuing protectionism. He asked that the world should be ready to respond to these challenges and address the issue, because the world as a result of these changes is becoming more complex. The Aggrey-Fraser-Guggisberg Memorial Lectures were instituted in 1957 to commemorate the contribution made to the founding of Achimota College and the advancement of higher education in Ghana. Sir Wolfensoh will give the second and final part of the lecture on the title: “Africa in the Global Century: Partnerships for Success,” today, Thursday May 15, 2008. President Kufuor and some former Vice –Chancellors of the University, traditional chiefs, academics, students and members of the business community and the general public were present at the Lecture. The Vice-Chancellor of the University of Ghana, Legon, Prof. Clifford Tagoe, was the chairman.