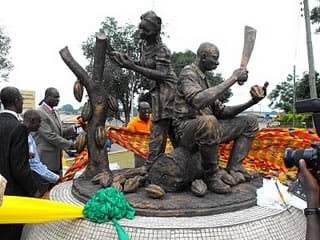 
Kuapa Kokoo has built a cocoa monument in the center of Kumasi, the second largest city in Ghana to honour cocoa farmers in Ghana. The project which cost the union over Forty Thousand Ghana cedis (GH¢40,000.00) was initiated as part of the Kumasi beautification project started by the city authorities. The Union extended its developmental projects of building and managing schools,providing wells, boreholes, corn-mills, toilets,etc. to being the first cocoa marketing company to erect a monument in honour of the country's industrious cocoa farmers who contribute immensely towards to economic growth of Ghana. Unveiling the bronze-made monument on 3rd August 2010, Mr Samuel Sarpong the Chief Executive of Kumasi Metropolitan Assembly applauded Kuapa Kokoo for its vision and foresight. ''It is important in the life of every corporate body, that a landmark is established for the sake of posterity and Kuapa Kokoo is leaving a legacy for the city of Kumasi as well as creating awareness of their existence.'' the chief executive said. During the unveiling ceremony, the Executive Director of Kuapa Kokoo Farmers Union (KKFU) appealed to the city authorities to consider naming the triagle where the statue is situated after Kuapa. The statue is located at Adum around the Otumfuo Osei Tutu 1 Avenue and Ghana Water Company street. Many among the dignitaries gathered expressed similar views as that of the Executive Directo.