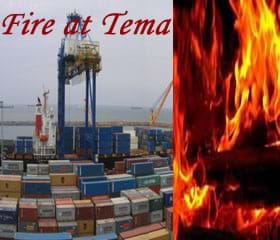 
Three persons are feared dead in a ruinous fire that gutted Midland International Ghana Limited at the Tema Port. The fire which started around 4:00 pm on Saturday, September 26, is believed to have started when a tanker which transports ethanol for alcohol production exploded whilst engineers were working on it. Eyewitnesses who spoke to Citi News said they were the first to enter the area of the incident where they retrieved one charred body. They said one of the victims who was severely injured was immediately conveyed to the hospital. Citi News’ Correspondent in Tema Elvis Washington said the inferno has not been put under control as the alcohol in the tanker has worsened the situation. According to him, police officers at the scene had to fire gunshots to disperse angry workers at the port who were infuriated by the inability of fire personnel to quench the fire on time. The Public Relations Officer of the Fire Service in Tema, Mr. Affum said they were finding it difficult to put out the fire because there was not enough water to handle the pressure from the fire as at 5:00pm on Saturday. He also said one of their extinguishers had developed a fault. Citi News has learnt that the Manager of the company is among the trapped persons in the building but it is uncertain whether he is alive or dead. Midland International Limited is West Africa and Ghana’s leading importer and distributor of ethanol for alcohol production. Its terminal consists of 5 tanks, with a total capacity of 5,000,000 liters, office building, Ghana Excise office, and a drum loading station, with digital flow meters as well as a tank truck loading rack. Midland distributes ethanol to the Ghanaian market and exports to various West African countries as Togo, Burkina Faso, Benin, Ivory Coast, Sierra Leone and Liberia as well.