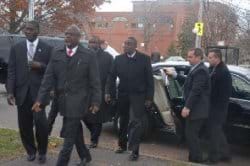 The President of Ghana, John Evans Atta Mills has assured the diplomatic community in Canada of government’s determination to ensure free, fair and transparent polls in Ghana next year. He said nobody had the right to deny Ghanaians their God-given right to elect leaders of their choice when the nation goes to the polls next year to elect a president and members of parliament, and condemned the tendency of some political leaders to overstay their welcome, with resultant conflicts. Such electoral conflicts, alongside with other setbacks, the President said, have not helped the African cause, and therefore repeated his call on leaders to use the mandate given them to lift the people out of poverty, rather than conveniently forgetting the reasons why the people voted them into power. President Mills was speaking at a banquet organized in his honour by Dr Richard Turkson, Ghana’s High Commissioner to Canada, as part of the President’s working visit to the North American nation. President Mills, who had earlier held discussions with executives of the Canadian Commercial Corporation, and the Canada Africa Parliamentary Council, observed that Africa has rich and abundant resources, and projected a “real” change as Africa comes up with new crop of leaders who are interested more in the improvement in the lives of the people. With happy memories of his stay in Vancouver, President Mills lauded Canadians for their sacrifices and assistance to Ghana, especially in deprived areas to improve the lives of Ghanaians. “Canadians are good , genuine friends and great benefactors,” President Mills said, adding that they have sacrificed themselves in a number of deprived areas in Ghana to improve the lives of the people. President Mills assured the diplomats that Government has had to work very hard to overcome the initial challenges when came into power, and invited investors to take advantage of the improved economy and sound democratic credentials to invest in Ghana. Government, he said, has improved the investment climate, and would maintain investors to participate in the Ghanaian economy. President Mills expressed appreciation to Ghanaians in Canada and elsewhere in the Diaspora for their remittances that supported their kith and kin back home and for the Ghanaian economy. “I give you my warm greetings and wish you all the best,” President Mills said, drawing a standing ovation and marathon applause from the audience, including Mr John Schramm, former Canadian High Commissioner to Ghana, who, the President said, was with him in the same Hall of Residence at the University of Ghana, Legon, 50 years ago.