IGP Warns Police To Stay Away From Politics 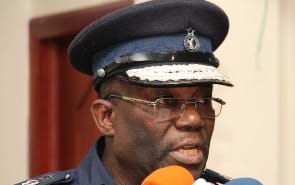 
The Inspector General of Police, Paul Tawiah Quaye, has cautioned police officers to stay out of active politics, especially in the run up to the crucial December 2012 general elections. The involvement of police personnel in active politics, he believes, would cripple the foundation of the country’s democratic structures. “Personnel must therefore abstain from taking part in any political activities. Active participation in politics by personnel could be dangerous and pose a serious threat to our democracy”. Speaking at a gathering of police and other security chiefs from across the country, at a conference held at the National Police Headquarters in Accra on the 21st of July 2011 the IGP warned that it was dangerous for the nation’s security personnel to be actively involved in politics since it could affect their judgment. The objective of the two-day conference themed, “One year of Strategic National Policing Plan: Its Impact on Contemporary Road Traffic Management and Democratic Policing” is to deliberate on the proper management of road trafficking, its regulations as well as the importance of democratic police intervention. The IGP, in his welcome address said that in regards to democratic policing, the police was extremely fundamental in the maintenance of democratic governance. It was against this backdrop that the police administration decided to dedicate a significant portion of the Strategic National Policing Plan (SNPP) to democratic policing. He noted however that this could not be achieved without the contribution of the public. “We believe that the police have a key role to play in sustaining democratic governance. We must therefore endeavour to work hard to protect the democratic structures of our institutions” he declared, adding "there is therefore the need to partner the public to ensure free flow of information to enable us carry out this responsibility." It was therefore imperative that the police steered clear of the distracting intricacies of politics in order to carry out their duties to the letter, he stressed. He announced that the Service was taking proactive measures to better discharge its duties, including the establishment of a Community Policing unit at the national headquarters and the acquisition of DNA technology to help in investigations. As well, the human resource base of the Service is being improved with the recruitment of able bodied men and women.