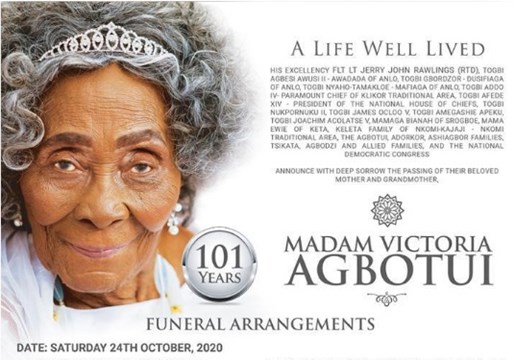 The mother of former President Jerry John Rawlings, Madam Victoria Agbotui, was laid to rest in her hometown, Keta in the Volta Region, after a moving inter-denominational state-assisted burial service at the forecourt of the State House in Accra last Saturday.
The service for the late former member of staff of the United Trading Company (UTC) and caterer at the former seat of government, the Castle, Osu, attracted a large number of personalities, including President Nana Addo Dankwa Akufo-Addo, the Vice-President, Dr Mahamudu Bawumia; the Speaker of Parliament, Professor Aaron Mike Oquaye; the Chief Justice, Mr Justice Kwasi Anin Yeboah; the Chief of Staff, Mrs Akosua Frema Osei Opare; past and present ministers of state, Members of Parliament (MPs), members of the Diplomatic Corps, the clergy and traditional leaders.

The Asantehene was represented by a delegation from Asante, led by the Chief of Heman, Nana Apau Wiafe Ababio Sanwansa.

Also present were some members of the June 4 Movement, among others.

The NDC presidential candidate, former President John Dramani Mahama, was in Keta, where the final burial service was held later in the day.

The service started as early as 7 a.m. with filing past by family members, friends and sympathisers, with the Winneba Youth Choir and the Armed Forces Regimental Band providing harmonious and solemn choral medleys in turns.

In his all-black outfit, a black face mask and shades to match, former President Rawlings, in a very composed mood, led the first procession of people who paid their last respects to his late mother.

Subsequently, other family members of the deceased, the wife of the former President, Nana Konadu Agyemang Rawlings; the High Command of the GAF, MPs, chiefs and queenmothers, members of the Diplomatic Corps, the officiating clergy, President Akufo-Addo and the First Lady, Mrs Rebecca Akufo-Addo, among other dignitaries and groups, solemnly filed past the casket of late Madam Agbotui to bid her farewell.

The service also witnessed the display of rich culture and the singing of hymns, choral songs and dirges by diverse groups.

The all-white casket was at the centre of the forecourt of the State House, fully wrapped with the national colours of red, gold and green and surrounded by military pallbearers.

A great majority of the attendees of the service were clad in white — signifying the celebration of life rather than the typical mourning of a departed loved one.

Even though the atmosphere was generally not a sorrowful one, the service was characterised by solemnity when the various tributes began to pour in.

Madam Agbotui was born in Keta on September 9, 1919 to Mr Emmanuel Kofi Agbotui, a District Court Registrar, and Christiana Aku Tamakloe, a trader.

She was the second of six children and one of 20 to her father.

She later worked at the Catering Division of the State Protocol Department of the Ministry of Foreign Affairs, where she rose to become the head of the division and retired in 1979, when her son assumed office as the Head of State and Chairman of the Armed Forces Revolutionary Council (AFRC).

After the burial service in Accra, the remains of Madam Agbotui were conveyed — with stops at Vume, Sogakope and Srogbe — to Keta, where other burial and final funeral service and rites were held, before she was finally laid to rest at the Sokpui Family Cemetery. 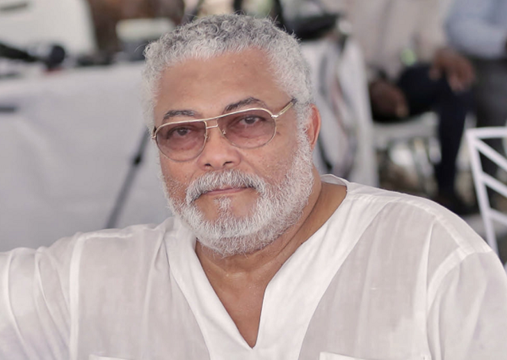 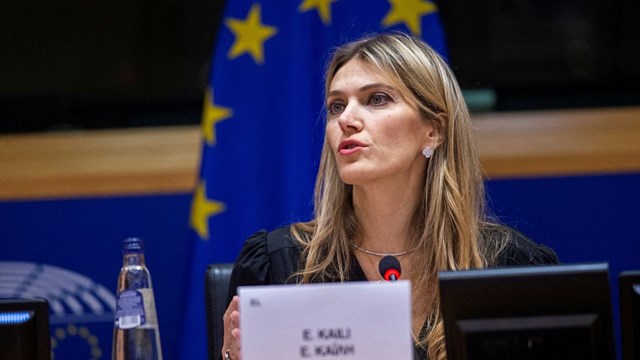