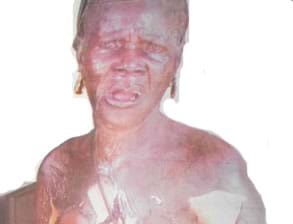 A 72-year-old grandmother suffered one of the most barbaric of deaths when she was burnt alive by a mob at Tema Site 15 after being accused of being a witch. A student-nurse, who appeared on the scene, attempted to rescue the old woman from her ordeal but the woman died of her burns within 24 hours of arrival at the Tema General Hospital. Five people who allegedly tortured and extracted the confessions of witchcraft from Ama Hemmah before drenching her in kerosene and setting her ablaze have been arrested by the Tema Police. But the suspects, including an evangelist, denied the crime and claimed that they were rather praying to exorcise the evil spirit from the deceased, Ama, when the anointing oil they had applied to her body caught fire. Two of the suspects are Samuel Ghunney, a 50-year-old photographer, and Pastor Samuel Fletcher Sagoe, 55, the evangelist. The rest are Emelia Opoku, 37; Nancy Nana Ama Akrofie, 46, and Mary Sagoe, 52, all unemployed. Briefing the Daily Graphic on the incident, the Tema Regional Police Commander, Mr Augustine Gyening, Assistant Commissioner of Police, said about 10 a.m. on November 20, 2010, Samuel Fletcher Sagoe visited his sister (Emelia) at Site 15, a suburb of Tema Community 1, and saw Madam Hemmah sitting in Emelia’s bedroom at a time Emelia had sent her children to school. Mr Gyening said Samuel then raised an alarm, attracting the attention of the principal suspect, Samuel Ghunney, and some people in the neighbourhood. According to him, the suspects claimed that Madam Hemmah was a known witch in the area and subjected her to severe torture, compelling her to confess to being a witch. He said after extracting the confession from Madam Hemmah, Ghunney asked Emelia for a gallon of kerosene and with the help of his accomplices, poured it all over the woman and set her ablaze. Mr Gyening said a student-nurse, Deborah Pearl Adumoah, who chanced upon the barbaric act, rescued Madam Hemmah and sent her to the Community One Police Station, from where she was transferred to the Tema General Hospital, but she died the following day. In their caution statement, the suspects denied the offence and explained that they poured anointing oil on the old woman which caught fire when they offered prayers to exorcise the demon from her. The docket has since been sent to the Attorney-General’s Department for advice, while the body of the deceased has been deposited at the Police Hospital mortuary for autopsy. Source: Daily Graphic