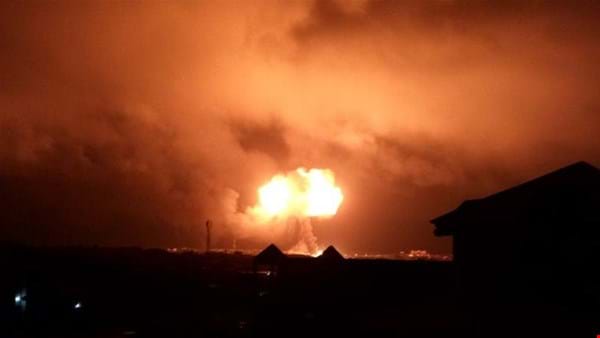 A natural gas station in Ghana's capital Accra exploded on Saturday evening, sending a giant fireball high into the sky above the city and killing a number of people.

The explosion about 7:30pm local time began at a state-owned GOIL liquefied natural gas station and spread to a Total petrol station across the street at the city's Atomic Junction, a witness said.

At least six fire trucks and several ambulances responded to the blast.

"Unfortunately there are some fatalities and we are working to have the numbers," Deputy Information Minister Kojo Oppong Nkrumah told a local radio station.

"There are quite a number also injured."

George Agbey, who was close to the scene of the explosion, said: "There was some panic and we all just moved away from the scene. It was like refugees moving away from a war-torn zone."

Several other witnesses said they had counted four or five bodies, although some bodies could have already been removed from the scene.

Frightened residents ran from the explosion and more than 200 police were deployed to help to cordon off the area after the initial explosion caused a second blast.

The petrol station is near a transport terminal and close to some hostels for the University of Ghana in Accra.

Authorities said the fires were later brought under control.

An explosion at a petrol station in Accra in 2015 killed around 100 people who had sought shelter from flooding nearby.

That was the country's worst disaster in more than a decade.

Infrastructure in Accra, a city of roughly 7 million people, has failed to keep pace with population growth after years of rapid economic expansion.