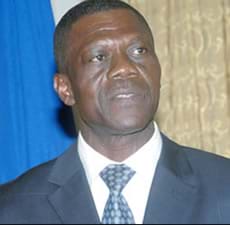 
The Human Rights Court in Accra has thrown out a legal objection raised by Lt. Col. Gbevlo, Lartey (Rtd.), National Security Coordinator in a case in which Shirley Ayorkor Botch way, Member of Parliament (MP) for Weija is seeking to enforce her fundamental human rights under the 1992 Republican Constitution. The NPP MP, who doubles as a former Deputy Minister under the President Kufuor, is currently battling the ruling National Democratic Congress (NDC) government in the law courts in relation to a piece of land (Plot No. 12A) she acquired at Ridge, Accra in 2007. She has jointly sued Brig. Gen. Joseph Nunoo Mensah Rtd, National Security Advisor, Lt. Col. (Rtd) Larry Gbevlo Lartey, and the Attorney-General, claiming that the first and second defendants are using security operatives to take the land which she has started developing on the basis that the land belongs to the state. The plaintiff's affidavit in support of her application said she leased a plot of land from the President of the Republic of Ghana in 2007 but on April 15, 2010 while her workers were busily at work, some group of men who said they were coming from the National Security and had been sent by the first and second defendants ordered the workers to stop work immediately. The security operatives, the plaintiff averred, then erected a signboard with the inscription 'Government Property. Stop Work. Keep Off, By Order' and left telephone numbers for her to call and find out. "'On April 16, 2010, the next day, the National Security operatives claiming to be acting on the instructions of first and second defendants visited the land again and took away various construction tools belonging; to her workmen with orders to stop work." She said she reported the matter to the Director-General of the Criminal Investigations Department on April 16,2010. Asa result she sought "a declaration that the respondents' interference with her right to develop, use and enjoy her land is wrong and an unlawful interference with her right to property and constitutes a violation of her fundamental human rights." She also wants damages for wrongful and unlawful interference and violation of the applicant's human rights and an order for perpetual injunction to prevent her from developing the land. As a result both the first and second defendants were served on April 28, 2010 and the third defendant was served on April 21, 2010. However, on May 11, 2010, Lt. Col. Gbevlo Lartey, through his solicitors, filed a notice to raise legal objection to the Weija MP's motion. The security capo contended that the applicants lease upon which she relies to enforce her alleged rights is ineffective as an instrument affecting the land. "It violates Section 24(1)of the Land Registry Law, 1962 .(Act 122) under which every instrument affecting land is considered ineffective until registered." The defendant contended that if the MP's lease were effective, the applicant would have been in breach of the covenant and would have failed to show that within three years of execution she has built a house to the value of the amount specified in the lease or has built a surrounding wall around the area to which the site plan attached to the lease relates. "The motion with the supporting affidavit raises so many terrible issues that cannot be appropriately resolved by an affidavit. A writ of summons would provide an appropriate remedy, not a motion." Dismissing the legal objection, the court, presided over by UP Derry said from the affidavit in support of the application there is no doubt that the MP is invoking article 18 of the Constitution adding "if any person's right to property is violated he is entitled to protection by this court by virtue of Article 33 (1) of the 1992 Constitution." The court said there arc no competing interests and the fact that the applicant has not yet registered her land does not bar her from taking steps to enforce under Article 18(1) Of the Constitution. The court also held that Mr. Gbevlo Lartey's argument that the MP should have issued a writ Instead of a motion is misplaced saying "by Article 33 (1), a person has a choice to take any action." The court therefore said the legal objection is misconceived adding that "the case should proceed."