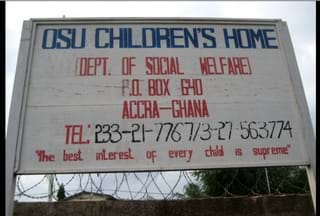 
The Committee set up to investigate the Osu Children’s Home, will on Thursday September 23, begin public grilling of key officials connected to the alleged rot at the home. The public hearing will be the first since the Committee started its work over a week ago. The government-backed Committee was formed after Investigative Journalist, Anas Aremeyaw Anas, released a heartbreaking TV documentary, in which some workers of the Osu Children’s Home were either seen stealing food items donated to the home or brutalizing underprivileged children who are inmates of the Home. Speaking to Citi News, Deputy Minister for the Ministry of Employment and Social Welfare and Chairman of the Committee, Hon Antwi Boasiako-Sekyere, said Thursday’s public hearing will help unravel the truth or otherwise behind Investigative Journalist’s TV documentary. He said the Proprietress of the Osu Children’s Home, Director of the Home, Head of the Osu Remand Home and the Director of the Social Welfare Department, are those slated to turn up for the public hearing. Mr. Antwi Boasiako-Sekyere explained that the decision to make the hearing public is to ensure transparency in a matter that is of great concern to the general Ghanaian populace. On Friday September 10, Investigative Journalist, Anas Aremeyaw Anas, met the nine-member-committee investigating the Osu Children’s home, following his exposé on deplorable conditions at the home. Mr. Antwi Boasiako-Sekyere said the Committee’s closed-door-meeting with Anas Aremeyaw, was revealing. According to him, Mr. Aremeyaw Anas gave further information that could not be captured in his video and promised to cooperate when he is recalled.